Israel’s Or Sasson had the final say at the Budapest Grand Prix as he conquered Paris Grand Slam bronze medallist Kageura Kokoro (JPN) to win his fourth Grand Prix title. Ekaterinburg Grand Slam silver medallist Sasson threw with a ko-soto-gake eight seconds into golden score for gold and, after this stellar showing, will expect to be in the frame for a medal at the World Championships in Tokyo.

In the first semi-final Baku Grand Slam winner and Junior world champion Gela Zaalishvili (GEO) lost to Kageura by ippon from an o-soto-gari. In the second semi-final Sasson proved to be too strong for Baku Grand Slam bronze medallist Anton Krivobokov (RUS) who was disqualified after picking up three penalties.

The first bronze medal was won by IJF World Judo Tour newcomer, 18-year-old Richard Sipocz (HUN) who defeated Krivobokov in a dream debut. Sipocz drove over his opponent with te-waza to send the crowd wild as the teenager was overcome with emotion. 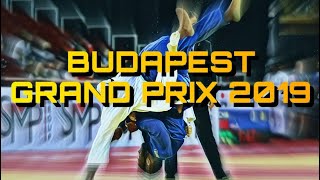 25 Jul 2019 14:55
Preview Grand Prix Zagreb with Riner but without Tushishvili