Rio Olympic Champion Tina Trstenjak of Slovenia has won the gold at the Grand Prix in Tunis. Trsrenjak entered the first final of the day where she was opposed to Nouchi Aimi (JPN), who won the Tyumen Grand Slam in 2016. But beside that major result, the Japanese is still relatively unknown on the international circuit, while Trstenjak is one of the most famous competitors of the moment.

The difference in status didn't seem to bother Nouchi, who was the first to attack and her straight standing position seemed to trouble the former world champion. After four minutes, both athletes had received only one shido each, given at the very end of the regular time. After 20 seconds of golden score, the Slovenian launched a powerful attack for no score and it was finally after 49 seconds that she could engage a left handed drop-seoi-nage for waza-ari and a sixth gold medal atva Grand Prix.

The very first bronze medal contest of the day opposed the 2015 Cadets World Champion, and 2017 Junior World silver medallist, Sanne Vermeer (NED) and the 2016 Oceania Champion Katharina Haecker (AUS). After 47 seconds Vermeer was penalised with a first shido for passivity. But then it was Haecker's turn to be penalized. With a superb koshi-guruma for waza-ari, Haecker took the lead of the bout and just had to control until the last seconds. Despite a second shido she won her third medal on a Grand Prix.

Magdalena Krssakova (AUT), winner of the Tbilisi Grand Prix in 2017 and Lucy Renshall (GBR), holder of three world circuit medals so far, faced off in the second bronze medal contest. After 49 seconds Renshall received a first shido for passivity. With 14 seconds left, Krssakova finally found a tiny opportunity to counterattack Renshall for a waza-ari on the edge of the competition area adding a fourth medal on a Grand Prix to her prize list. 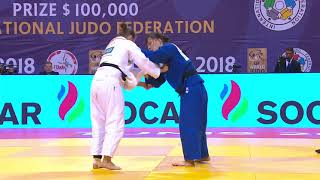 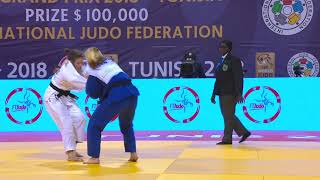 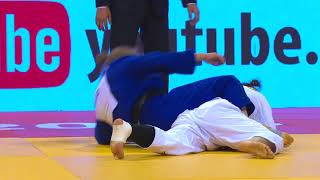