French title contender Helene Receveaux is the number one seed U57kg. She’s experienced, she won major tournament, but never won a European medal. Exactly that is the goal for the European Championships mission of Receveaux. Last year her mission to make it to the Olympic Games failed in Kazan when Pavia won the title and Receveaux finished fifth. Now the cards are flushed again and Receveaux will face some new opponents.

Receveaux won silver at the Grand Slam in Paris in 2017 and last year she won the Grand Slam of Abu Dhabi . She She won various Grand Prixs more than 15 World Cup medals and she won the World Junior Championships in 2010 in Agadir. Now it’s time to challenge the European level.

Last year’s bronze medallist in Kazan is Nora Gjakova of Kosovo. Also she won European Games bronze in 2015. She was European Cadet and U23 Champion. In Antalya she showed her form although in fact she was still ill, but that unveils the danger, she can be much better. Successcoach Driton Kuka will know exactly to push on what button to unleash the Kosovarian girls. Gjakova is a hot prospect and will for sure reach the top in Warsaw.

Jovana Rogic is another Serbian performer. We know her since Rogic won the IJF Grand Slam in Rio de Janeiro in 2012. She is 28 and more experienced than you might think. She won major medals in all age categories. She won bronze at the Grand Slam Tyumen in 2016, bronze this year at the Grand Prix in Düsseldorf and silver at the Grand Slam in Baku in 2017. Rogic is for sure a candidate. She’s cool and smells her chance.

Israelian Timna Nelson Levy is one of the girls of the successful Israel team. Coached by Shany Hershko she won a bronze medal at the Grand Slam in Baku in 2017. Timna was fifth at the World U21 Championships in Fort Lauderdale in 2014 but picked up the pace in the senior rapidly.

One of the new challengers will be Germany’s Theresa Stoll who has all the skills the surprise the best. Her appealing uchimata and will, is typical for her fast rise. She is determined to reach the top in rocket speed.

The Russians Irina Zabludina and Konkina can be dangerous. Zabludina showed her golden hunt in Tbilisi this year.

Still… none of the above reached the best eight at the Olympic Games. It’s typical for the new wind blowing where the non seeded players like Gneto (FRA), Livesey (GBR), Borowska (POL) and Bergstra (NED) might take some space to take out some of the seeded players. 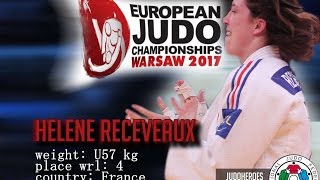 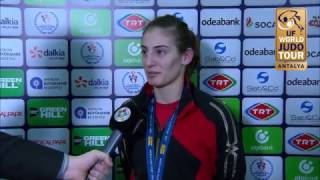 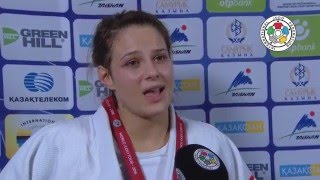 10 Mar 2017 19:05
Lien celebrates as Chinese Taipei anthem plays for the first time at a Grand Slam