The Hungarian captured nine Olympic medals and the 1992 Olympic Games in Barcelona were by far the most successful with four medals, but since then Hungary hadn’t won any medal until the London Games. In Rio the Hungarians have medal chances for Krisztian Toth, the world’s number 4 U90kg is seeded together with Eva Csernoviczky (U48kg) and Barna Bor (+100kg). The team doesn’t differ too much from the team in 2012 with a fighter each day of the Olympics in 2012, now Miki Ungvari, captain of the team fights U73kg and the Games will kick-off with Csernoviczky, hopefully with a medal again. At day 3 Ungvari and Hedvig Karakas are outsiders for a medal, Ungvari knows when to peak as he captured silver in 2012. Karakas came tremendously close with a fifth place.

At day 4, Laszlo Csoknyai is going for his second Olympics as well, U81kg. He won bronze at the Grand Prix in Havana, but is not a favourite. His experience may count though in this competitive weight category. Krisztian Toth is the new comer in the team, but also the major medal contender U90kg. Toth developed like a comet and won World silver in 2014 and was ranked world number one in 2015. Toth won three silver medals this year at the Grand Prix Havana, Grand Prix Düsseldorf and European Champoionships in Kazan. Toth is by far the youngest of the with 22, Joo the second youngest, in Rio 26.

At day 6 Abigel Joo will fight U78kg. She became fifth in London due to a knee injury but was absolutely in medal shape in 2012. Joo was the only Hungarian who won an IJF World Tour event this year, in Havana. Miklos Cirjenics had an amazing sprint in April with bronze in Samsun, silver in Baku and he won bronze in January in Havana. It delivered him just a place in the seeded area U100kg. He proved to be able to surprise. At the last Olympic judo day Barna Bor will do another attempt to medal at the Olympics.

One of the best referees in the world of judo Annamaria Fridrich is Hungarian too, she is in action each day. 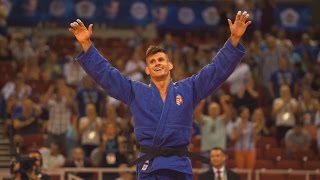