The BJA have announced the team for the World Judo Championships in Kazakhstan earlier this month. Under the guidance of Gemma Gibbons who missed the 2014 Worlds in Russia because of an injury, the British team consists of 9 members. Some say that it’s not much and for instance, Danny Williams will be missed with his three consecutive gold medals in San Salvador, British Open in London and Asian Open.

Williams reacts respectful to the BJA: "It is disappointing as I feel really good and on form at the moment. Just got to keep pushing through the Continental Opens and Grand Prixs towards Rio."

None of the team except for Alice Schlesinger (for Israel) ever won a medal at the World Championships. Medals achieved in the last decade can be counted in one hand. Since the last World title by Craig Fallon in 2005 the British won 4 medals, a painful statistic despite an increased list of British competitors. The rules were changed and double positions could be sent to the World Championships in contrast to one place for the Olympic Games. Due to the Olympic Games where 2 medals were collected, the teams increased. Twenty participants in 2010 in Tokyo, sixteen in Paris and after the Games, eight athletes were sent to Rio in 2013, to four last year in Chelyabinsk.

In that respect, the nine of this year are double the team of last year, plus Alice Schlesinger who switched from Israel to the UK.

This year 15 medals were captured at the IJF events including the World Masters. A better achievement then the 10 medals in the same period last year, and four gold medals, all for the women Schlesinger, Davis, Conway and Gibbons. Two out of 15 medals won by the men.

Sally Conway is in fact the captain with three medals this year, gold in Baku, silver in Zagreb and bronze in Samsun and ranked at the highest British position at 6 U70kg and the only athlete who defeated the untouched Kim Polling (NED) this year. 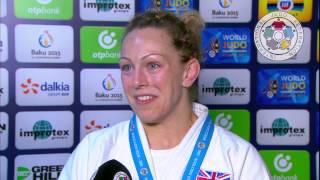 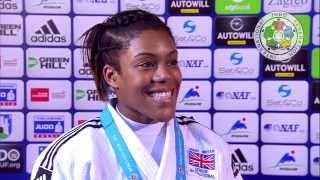 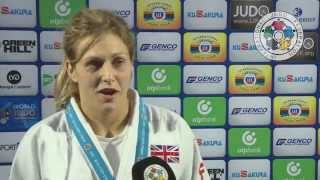