Two titles for the host nation, Georgia, on the third day of the EYOF in Tbilisi. Both gold medals were achieved by two Georgian young women. Who would have thought that this would happen some years ago? Mzia Beboshvili took the gold in U52kg while Eteri Liparteliani grabbed the U57kg title supported by the home crowd. Hasil Jafarov won the title in U73kg for Azerbaijan.

Never before was a Georgian woman in the final of the EYOF, and now there are two in one day! The only medal won in previous editions was for Mariam Janashvili in 2013 and obviously the bronze of Natalia Kipshidze on Wednesday.

The title for European Cadet Champion Beboshvili was calculated and expected. In Sofia last month, she won the European Cadet title. This time in Tbilisi the final was against Dutch youngster Ilse Buren. In the final, Beboshvili stunned Buren for waza-ari with a right sided osoto-gari before continuing with a transition to osae-komi to end her day in an excellent way. The bronze medals in U52kg went to Nasiba Ibragimova (RUS) and Irem Korkmaz (TUR).

Fifteen year old Eteri Liparteliani surprisingly won the U57 title, Emilia Kanerva (FIN) was the favourite to take the double. In the semi final Kanerva was defeated by the talented youngster.  Liparteliani said: “I lost against Kanerva twice already but before that contest I thought if I managed to reach the semi-final stage I have to win regardless of the opponent.”

Kanerva took bronze as well as Danna Nagucheva (RUS).  The final was between Liparteliani and Anna Dabrowska (POL) . The Polish finished fifth in Sofia at the European Championships and won two European Cup bronze medals this season. This year in Cluj, Liparteliani won silver at the European Cup where she lost to Kanerva. In the final here at the EYOF, Liparteliani returned to form with her ashi-waza skills to throw for yuko which was enough to take the first spot in the final. An initiated attack from Dabrowski was used by Liparteliani to throw for ippon to end the match. "At the Cadet Europeans I wasn’t as prepared as today and that was the reason I lost there. But right now of course I don’t think about it anymore. I had time to prepare and forget that defeat to be able to achieve a great victory today”, the 15 years old judoka expressed her feelings. "The crowd was an extra boost for me and it was a fantastic atmosphere and I wasn’t nervous at all, it was rather the opposite for me", she added.

Varlam Liparteliani is indeed a relative of Eteri. When asked how much of a motivation Varlam is for her she responded: "Yes, he is one of my relatives and he is very famous and everyone is asking me if we are related. Having to wear the same surname on my back patch gives me extra energy and power on wanting to win.” Eteri Liparteliani will be in a spot light again at the upcoming Cadet World Championships in August in Sarajevo.

Hasil Jafarov (AZE) is the new kid on the block, glimmering with gold. In the final the Azeri defeated Razvan Ciolan (ROU). Jafarov won the gold by defeating five opponents. In the quarter final he beat Lukas Wittwer (SUI) who won bronze in Sofia. The pools ended somewhat surprisingly today compared to the European Championships. In the final, Jafarov was too strong for Razvan Ciolan who improved his seventh place of Sofia with silver this time. Jafarov stated: "I am really happy, I worked hard for this and I would like to thank to our president. I am proud to win the gold medal and I am grateful to my parents and coaches for all their support. I also would like to thank to the Georgian Federation for hosting this event." 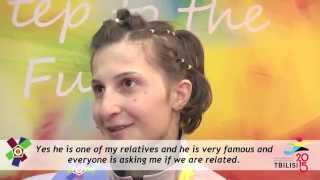