At the last day of the individual tournament of the Universiade in Gwangju, Korea added another three gold medals making a total of 8 gold medals, 50% of the treasure.

The day started with the category U48kg where the crowd saw another Korea enter the final JEONG Bok-yeong (KOR), who in the semifinal eliminated the ultimate favorite, MUNKHBAT Urantsetseg (MGL), world champion and world number one. In the final, she was opposed to Gabriela CHIBANA (BRA), who is only ranked 50 in the world, even if she already won a Grand Prix and finished second at a Grand Slam, but that was in 2012 (respectively Abu Dhabi and Rio).

Despite all the efforts of CHIBANA, JEONG added one more gold to the already long prize list of the Korean team. During the first half of the fight, she scored a waza-ari with a powerful ipon-ko-uchi-gari that she was able to maintain until the end.

The first bronze medal fight opposed the finalist of the last edition of the Budapest Grand Prix, TONAKI Funa (JPN) and Cristina BUDESCU (MDA), who’s best place so far at the international level was a 5th place at the 2014 Junior World Championships in Ljubljana. The first in action was the Japanese, with a o-soto-otoshi, but for no score, before BUDESCU got penalized two times for a cross guard. Just after the half of the fight, TONAKI could use the first real dangerous action to bring her opponent on the floor and immediately immobilize her for ippon.

The second bronze medal fight opposed XIONG Yao (CHN) and MUNKHBAT Urantsetseg (MGL). If the world number one didn’t show her best judo during the preliminaries, during the bronze medal final, she didn’t give a single chance to XIONG, scoring a first waza-ari, followed a little later by a clear ippon with a reversed seoi-nage.

Women’s Open: Korea is on Fire with KIM’s Gold

Confirming the leadership of China over the women’s heavy weight category in the world, KANG Jie (CHN), bronze medallist of the 2011 Qingdao Grand Prix, entered the final in the open division, giving no chance to her opponents during the preliminary rounds. She was opposed to KIM Ji-youn (KOR) winner of the 2014 edition of the Jeju Grand Prix.

The gold medal looked accessible to KANG Jie, who so far didn’t have any difficulties to go through the preliminary rounds. But today Korea was on fire and the third Korean athlete in the final won the third gold medal for the host countries, as KIM sent the Chinese twice to the tatami with a surprising reversed drop-seoi-nage.

The first bronze medal fight saw BABINTSEVA Aleksandra (RUS), facing the silver medallist of the 2015 edition of the Baku Grand Slam, PAKENYTE Santa (LTU). The Lithuanian was penalized with a first shido for passivity. Smaller than her opponent but much more active and courageous, BABINTSEVA deserves a beautiful bronze medal.

In the second bronze medal fight, YAMAMOTO Sara (JPN), who had no record at the international level yet, was opposed to the two time medallist at continental opens, Galyna TARASOVA (UKR). The first attempt of uchi-mata from YAMAMOTO was not successful, before she was penalized for stepping out of the fighting area. But it was the turn of TARASOVA to receive two shido in a raw for passivity and also for not respecting the limits of the fighting area. Exhausted, the Ukrainian seemed suddenly incapable or stopping YAMAMOTO who score a yuko with arai-makikomi, which she continued with an immobilisation for ippon.

The final of the day in the light weight men’s category was a classic as KIM Wonjin, the current continental champion, of Korea, was opposed to OSHIMA Yuma of Japan, silver medallist last year at the Düsseldorf Grand Prix.

For the second time of the day, Korea stepped in the top of the podium. Even if KIM and OSHIMA showed to be very close to each other, supported by an enthusiastic public, KIM scored a yuko with an o-soto-gari, which he could keep alive until the end. But the battle was terrific.

The first bronze medal fight opposed, the bronze medallist of the Düsseldorf grand prix this year, Phelipe PELIM (BRA), and DAGVADORJ Bayarmagnai (MGL). After one minute, both athletes were penalized with a first shido for passivity. The second minute was for the Brazilian, being more active, he pushed DAGVADORJ to be penalized with a second shido. In a perfect mongolian wrestling style, DAGVADORJ was then close to score, but PELIM miraculously escaped and a little later, the Brazilian executed a perfect action-reaction movement (tani-otoshi) to literally incrust DAGVADORJ into the tatami for ippon.

The second bronze medal fight opposed Ahmet Sahin KABA (TUR), silver medallist at the 2014 edition of the Zagreb Grand Prix, and Albert OGUZOV (RUS), who in March won the gold medal at the Casablanca Continental Open. KABA was penalized with a first shido after a little more than one minute. More precise on every attack, OGUZOV, seemed to be capable of controlling the fight even with only one shido difference. But probable a little too tactical, when there were still two minutes to go, he was also penalized for passivity. With less than one minute, the penalty difference was set up again, and this time OGUZOV kept it active until the final gong.

The last final of the individual competitions saw Juhan METTIS (EST), who’s best result so far at the international level was a silver medal at the European Open Tallin 2014, besting his early performance in this Universiade tournament, as he finished at the bottom of the podium a few days ago in the +100kg weight category. In the final he was opposed to UEDA Katsuma (JPN), who so far had no record at the international level.

The last gold medal of the day went to UEDA Katsuma, who scored a first yuko followed by an immobilisation that he could only hold for less than 15 seconds, for a second yuko.

The first bronze medal of the category opposed Karolis BAUZA (LTU) and JI Geunbae (KOR). Both athletes were rapidly penalized for blocking their opponent. The first real offensive sequence started after the first minute when JI tried to attract BAUZA in the edge of the tatami, but, that exactly the moment that BAUZA chose to put the Korean out of balance, using is momentum to make him ‘fall in the valley’, literally tani-otoshi.

In the second bronze medal fight, Vladut SIMIONESCU (ROU) was facing Fedir PANKO (UKR). The weight difference was obvious when the two competitor entered the tatami and SIMIONESCU, already bronze medallist in +100kg a few days ago, added a second medal to his prize list as he threw PANKO with a left handed uchi-mata, before following him on the floor with an immobilization for ippon. 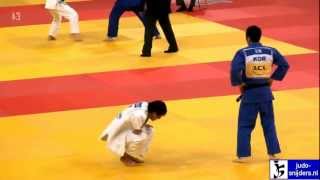 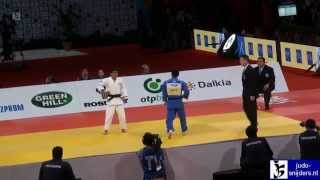 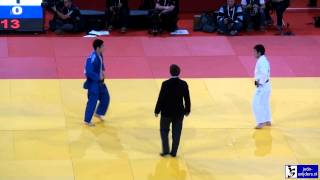