In the category U100kg Korean Cho Guham was the favourite in advance. 23 Year old, Clément DELVERT, of France, created the surprise by defeating the GOTO Ryutaro (JPN) in the semifinal. With his powerful o-soto-gari, he went through the preliminary rounds to face the home star and top 16 in the World Ranking list, CHO Guham (KOR), winner of the Tokyo Grand Slam in 2014. Despite all his efforts, the French seemed incapable to overcome the power of CHO, who controlled the final until the end. Cho wins the first gold medal for Korean on his home soil.

The final of the women’s -78kg weight category opposed the 22 year old French, Samah CAMARA, ranked 51 in the world and silver medallist at the 2014 World Junior Championships, and Alena KACHOROVSKAYA of Russia, ranked 34 in the world, who already obtained two medals on the occasion of IJF World Judo Tour events (Abu Dhabi and Almaty 2013). The two finalists proposed a very tough fight, with a lot of attacks from both sides and CAMARA could family celebrate her victory with her coach after the yuko that she scored in the second half of the fight.

In the second bronze medal contest, Brigita MATIC (CRO) was opposed to Maike ZIECH (GER). In front of Mr. Wilfried Lemke, the Special Adviser to the United Nations Secretary-General on Sport for Development and Peace, ZIECH won the first medal of the German delegation on the occasion of the judo event.

The final of the day in the women’s +78kg weight category saw two Asian athletes competing for gold: KIM Minjeong (KOR) and ASAHINA Sarah (JPN), giving a first chance to the host country to step on the top of the podium. KIM (WRL 11) is a well known athlete on the international circuit as she already won the Baku Grand Slam in 2014, and was the finalist of the recent Asian Championships. ASAHINA is definitely one of the raising stars of Japan in the women’s heavy weight as she won the Junior world championship last year and finished 2nd at the last Tokyo Grand Slam. During the first half of the final KIM seemed to give some troubles to the young Japanese, but one attack of ASAHINA was enough to score a superb ippon with a huge hip movement.

Heavyweight title for men to Japan

Juhan METTIS (EST) and Nabil ZALAGH (FRA) were opposed in the first bronze medal fight. During five minutes only penalties were distributed on both sides, with a little advantage to the French but on the final gong, ZALAGH finally scored a beautiful ippon with a counter attack.

The second and last bronze medal fight of the day opposed Yelaman YERGALIYEV (KAZ) and Vladut SIMIONESCU (ROU), who destroyed YERGALIYEV’s hopes to win a medal in Korea, with a superb de-ashi-barai for ippon. 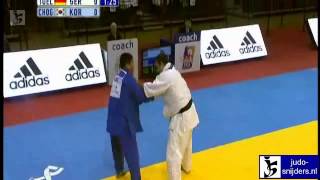 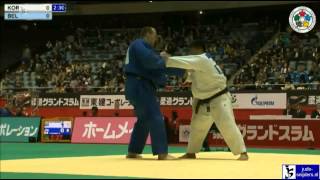 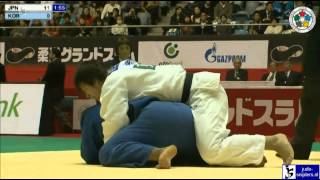