Vitaly Makarov celebrated his birthday in Mongolia with the team of Russia. He is now the Team Director and busier than ever before. Since Ezio Gamba left the team due to his illness, Makarov has a lot of tasks. His real home is with his family in Spain but he travels a lot throughout the year.

Vitaly Makarov was a world champion and Olympic medallist and fought some heroic fights against some of the top athletes in that time such as Gennadiy Bilodid, Christophe Gagliano, Daniel Fernandes, Won-Hee Lee and Jimmy Pedro. However the best match of them all was against Japan’s Kanamaru.

The best judo matches are those where both players are trading attacks constantly. It’s not that common to see an all-action final where it could really go either way. Vitaly Makarov’s (RUS) final in the 2001 Munich World Championships was one such fight.

His opponent was the dynamic Japanese player Yusuke Kanamaru, a morote-seoi-nage specialist who had beaten Makarov just a few months earlier in the final of the Budapest World Cup.

Makarov kicked things off with an uchimata attack in the opening seconds of their fight. Kanamaru answered that with drop morote-seoi-nage moments later. This back-and-forth attacking pattern would go on for the rest of the match.

There was actually very little variation in the techniques each player used. Occasionally Kanamaru would use yoko-tomoe-nage but for the most part, it was morote-seoi-nage. His main attack was a drop version but he also had a standing version where he would come in with a “floating elbow”. This was a common approach used by Japanese players whenever they did a standing morote-seoi. Triple Olympic Champion Tadahiro Nomura also used the “floating elbow” approach when doing standing morote-seoi.

As for Makarov, he mainly did uchimata though at one point in the fight, as Kanamaru was pushing forward, he decided to give his Japanese opponent a taste of his own medicine, and did a drop seoi-nage that nearly scored. But Makarov’s main mode of attack was uchimata.

With both players clearly very familiar with each other’s style, their respective favorite techniques weren’t working. But going into the final minute of the match, Makarov was ahead by two yukos. He had gotten the first one by countering one of Kanamaru’s morote-seoi-nage attacks and the second was through a well-timed foot-sweep.

With little time left in the match, Kanamaru piled on the pressure and as they were heading towards the edge of the mat, Makarov unleashed yet another uchimata. This time, it launched Kanamaru into the air and landed him flat on his back for an indisputable ippon.

And with that, one of the most exciting matches in World judo came to an end. When Kanamaru bowed to Makarov, he had a smile on his face and congratulated him warmly as they shook hands. It was an acknowledgement that the better player for that day had won. Kanamaru and Makarov became good friends also after their careers. 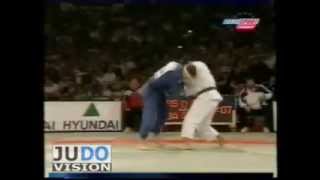 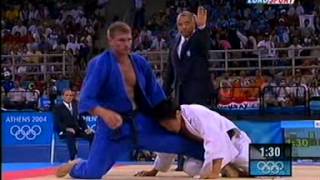 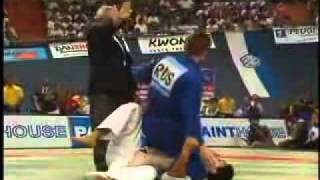