Masashi Ebinuma will be based in the UK Triple World Champion Masashi Ebinuma will be based in Cardiff with his wife and two children for at least a year. During his time there, he will be joining the Welsh Judo Coaching Team to gain coaching experience.

He joins a long line of Japanese champions who spent some time in the UK to learn English while helping to teach judo there. Past greats who had done this include Yasuhiro Yamashita, Nobuyuki Sato, Katsuhiko Kashiwazaki, Kaori Yamaguchi and Kosei Inoue, among others.

Ebinuma was a World Champion at U66kg in 2011, 2013 and 2014. In 2012, he was the top favorite for an Olympic gold medal in London, but in the semifinal he was unexpectedly thrown for ippon with a sumi-gaeshi by then-unknown Lasha Shavdatuashvili of Georgia.

It was in the London that Ebinuma got involved in one of the most controversial referee decisions in judo history. In his quarterfinal match against Cho Jun-ho of South Korea, Ebinuma came closest to scoring a point during regular time. The match then went into Golden Score where Cho was more aggressive. In the hantei that followed, Cho was announced the winner. The referee commission however summoned the referee and corner judges and asked them to reconsider. The re-did the hantei and this time, the decision was given to Ebinuma.

Although some people criticized the decision, a careful analysis of what had happened tells you that the referee commission was correct in its assessment that Ebinuma should have been declared the winner. The hantei decision is supposed to go to the one who came closest to scoring, and that person was Ebinuma. Cho was indeed more aggressive during Golden Score but he never came close to scoring. The decision thus should have gone to Ebinuma, and in the end, it did.

Ebinuma was involved in another controversial refereeing decision in the 2013 Rio World Championships. In the final of the U66kg division, Ebinuma’s opponent, Azamat Mukanov of Kazakhstan, constantly attacked him with an illegal waki-gatame. In one of those vicious attacks, he fractured Ebinuma’s arm but Ebinuma refused to tap and eventually after a prolonged ground exchange “matte” was called. Despite having an injured arm, Ebinuma rose to the occasion and attacked Mukanov with a hopping ouchi-gari that scored ippon. An appreciative crowd roared its approval.

The fact that both the referee and the video judges failed to penalize Mukanov for doing what was clearly an illegal technique not once, not twice, but three times, was one of the greatest failures of refereeing ever seen at the World Championships.

Ebinuma, who had always struggled to cut weight for his division, finally moved up to U73kg in 2018. In doing so, he provided Japan with a "good problem" with three World Champions (Ebinuma, Hashimoto and Shohei Ono) all vying for the U73kg Olympic spot.

It proved to be a bit of a challenge for Ebinuma to adjust to the new weight class. Although he took part in many IJF World Tour events, he could not get a gold medal until November 2019 when he beat Hashimoto in the final of the Osaka Grand Slam. To his credit Ebinuma had also managed to beat Shohei Ono (using uchimata, no less) in a domestic Japanese competition although he had lost to him twice in IJF events.

Ebinuma announced his retirement from competition in April 2021 after he was not selected for the Tokyo Olympics. 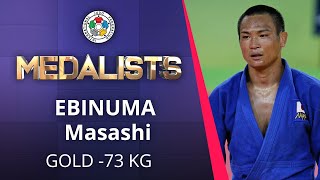 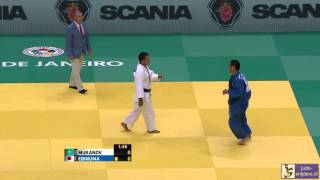