With one week to go for the Olympic Games, the judo fans warm up for the previews. At the first day on Saturday the lightweights will start the apotheosis of their journey. For years -48kg has been the private hunting ground of the Japanese, a kind of garden closed to others. The first day of any tournament used to end with the Japanese anthem. It still happens, but less often. Now there is more diversity.

In Tokyo the Japanese candidate for the title, Tonaki Funa, will face numerous threats, most from Europe, but not all. To begin with, the defender of the title comes from the other end of the planet. Paula Pareto put Argentina on the judo map one afternoon in July 2016. Since then she has never shone at the same level but at the Games everyone is hoping to see a more polished and experienced version that can deliver a great performance.

There are seven Europeans with very serious credentials. We will talk about the seventh later. First of all there is Distria Krasniqi the number one seed and seems to have a good draw. She is Kosovo's safest bet because she is the world number one and has just completed an outstanding year and a half cycle, with four titles on the World Judo Tour. Her fifth place at the World Championships in Budapest should not be misleading because Krasniqi went to Hungary to better prepare for the Olympics. In Tokyo it is more than likely that she will compete at her best. As for Tonaki, Krasniqi defeated her in January.

Spain was one of the delegations with doubts until the last tournament. Julia Figueroa had to fight until June to discard Laura Martínez Abelenda, in one of the most intense and longest fratricidal duels of recent years. Figueroa travels to Japan with the psychological impulse of a bronze medal in Budapest and very good feelings. There she confessed her desire to change the colour of the medal because she accumulates many bronzes. Tokyo would be the perfect setting. Wuth Figueroa and Munkhbat there are two strong quarter final candidates.

Just as passionate and determined as Figueroa is Catarina Costa. The Portuguese judoka is not among the favourites but the Games have always reserved monumental surprises. Costa's strengths are speed and refined technique. Perhaps, in the heat of the battle between great contenders for the title, the Portuguese will find an opportunity to reach the semi-finals.

The same can be said for Irina Dolgova (RJF). At 25 the Russian already has the necessary experience at the highest level because, in total, she has 17 medals from the WJT. A silver in Kazan and a fifth place in the most recent European Championships offer hope of a medal. But she is in the pool with Krasniqi but may reach the quarter final.

Shirine Boukli is a separate case. At 22 years old, the Frenchwoman has made a strong breakthrough among the incumbent professionals. Boukli has won three tournaments, including the European Championships, but above all she has beaten all the best and she has done so in just one year. She is fearsome and has already been unveiled. Her youth represents a stream of fresh air in a French team in full conversion, mixing experience and new faces and possessing fabulous firepower. Boukli will be the front row of a team with enormous ambitions and will have to face Daria Bilodid if she overcomes Milica Nikolic of Serbia. A tough series of matches and she defeated Bilodid before so she can stunt. This is the most spectacular preliminaries match of the day.

Marusa Stangar is also part of that generation that aspires to fire the majors. In addition, Slovenia already has an Olympic champion, Tina Trstenjak (-63kg), but surely Stangar would not mind taking the limelight from her compatriot. Winning will be difficult but not impossible.

From Mongolia, far from Europe, comes another tough nut to crack. Munkhbat Urantsetseg is one of the veterans that the youngest women wish to retire. Munkhbat has won almost everything and, at 31, is still in the top five in the world. If she has a good day, she is likely to reach, at least, the semi-finals. Her only blemish on a shiny resume is the absence of Olympic medals. Tokyo emerges as a last chance to put a finishing touch to a dazzling career. Will it be a fast ending or can she reach the quarter final, the draw gives us that impression that she might face Figueroa.

However, all these candidates for gold, silver and bronze will have to take into account a woman we have not talked about yet, the famous seventh judoka from Europe and she will surely be the most dangerous threat.

Daria Bilodid is still a mystery. Twice world champion and unbeaten for two years, aside from a blip at the World Judo Masters in January, the Ukrainian seemed destined for a long and prosperous reign, until the pandemic arrived. For unknown reasons Bilodid stopped winning after the 2020 Paris Grand Slam and since then has accumulated disappointments because the two silvers and the two bronzes obtained in the four tournaments she has attended are not to her liking. She wants to earn more than the others and when she doesn't, she collapses and lets out inconsolable cries. Against Boukli she will have to re-invent herself, but if anyone can, it will be Bilodid but it will be a hard match where she will put the pressure high on Boukli and chances will come for both. 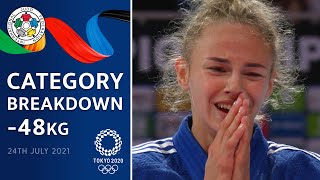 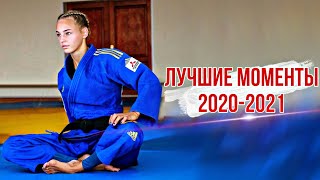 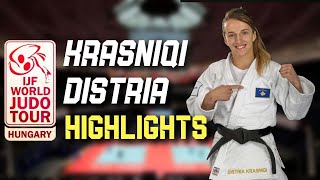