What a surprising tournament at the first day of the World Championships in Budapest were some of the favourites suffered an early defeat but some warriors survived the shift and showed their form despite all the pressure on their shoulders. The final for men U60kg was between Gusman Kyrgyzbayev (KAZ) and Yago Abuladze (RJF). Both athletes were seeded in Budapest but not the usual suspects for the final.

After only 30 seconds, Abuladze, who seemed to be under pressure on the ground, totally reversed the situation to pin down his opponent, but 9 seconds were not enough to score. Abuladze's is able to do arm roll(s) to both sides. Anyway, only a few more seconds were necessary for Abuladze to score a first waza-ari with a massive hip movement. He doubled the score and secured a significant victory a little while later, with a left-handed o-soto-otoshi. Abuladze was obviously the strongest today and he proved it in the best possible way.

Current World Champion and European Championships bronze medallist Yago Abuladze said: "I am very surprised to hear that my judo is good because lots of people tell me that I have a strange style. I wanted to break stereotypes by executing good moves that would also mean victory. My ne-waza move was inspired by Varlam Liparteliani. I saw many videos of him doing that technique and I liked it a lot, so I started to work on it and it seems to work well, as you have seen today. I am happy with my red back number but I hope soon it will turn gold."

Abuladze become the first World Champion for Russia since Nikolay Ozeghin in 1995. The finalist of 2014 and 2018 (Mudranov and Mshvidobadze) took silver for Russia.

For the first bronze medal match, bronze medallist from the last European Championships, Karamat Huseynov (AZE), faced Magzhan Shamshadin (KAZ), 65th in the World Ranking List. The first 45 seconds were more like an observation round as both Huseynov and Shamshadin had kumi-kata at the end of the sleeves and were trying to pull, to suddenly change direction and go under the centre of gravity of the opponent. Shamshadin was penalised with a first shido for passivity as the match unfolded to reach the end without any score. It was time for golden score. The first action came from Shamshadin with a long distance ko-uchi-gari for no score. A little less than one minute of extra time was necessary for Huseynov to score a small but significant waza-ari, to step on to the podium.

Spain on fire at day 1

In the second bronze medal contest current European Champion, Francisco Garrigos (ESP), was opposed to the 2016 European Champion Walide Khyar (FRA). The Frenchman was penalised first for holding the belt of his opponent too long, even if according to his coach on the chair, this left arm was the solution. It is the solution as long as you attack immediately. With less than a minute to go, Garrigos showed why he is among the top athletes in the world, with a beautifully executed o-uchi-gari from which Khyar tried to escape, transforming the throw into a spectacular acrobatic move. A last shido received by Garrigos a few seconds before the end wasn’t enough to change the final result after his dynamic score and the Spaniard could celebrate his bronze medal and jump into his coach’s arms after the contest. 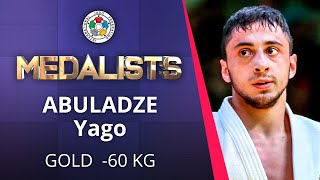 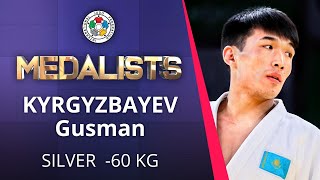 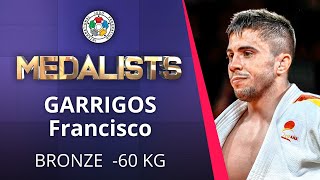