The top favourite for the The World Championships in Budapest U60kg Ryuju Nagayama lost surprisingly even before the quarter final and is out of the tournament. Nagayama got caught by Karamat Huseynov (AZE) who lost to Walide Khyar as pool winner. Nagayama clashed with Nurillaev, another great judoka and the Japanese star wasn’t convincing at all.

Ryuju Nagayama’s ambitions weren’t counting on those of Karamat Huseynov (AZE). The big upset of the day was Huseynov who crashed all the chances of his opponent in the third round of the qualifiers. was Huseynov's reverse seoi-nage on Nagayama. From some angles, it looked like it could have been an ippon.

In the next round it was a Huseynov full of confidence who stepped on to the tatami to face the French dynamo Walide Khyar, who had started his tournament by registering his physical commitment and opportunism, with his rough judo and disturbing kumi-kata for his opponents, made of cross-grips and close contact attacks. It was finally the Frenchman who won and found, on the way to the final, Gusman Kyrgyzbayev (KAZ), bronze medallist in Tel Aviv earlier this season. Kyrgyzbayev's Front Uchimata technique is really popular these days. Top seed in his quarter of the draw, Kyrgyzbayev did not weaken against Khyar, despite the penalties which rained down on both sides. Khyar thought he had almost won, while a third shido was given to the Kazakh, before it was withdrawn and the tricolor judoka then made a small mistake which cost him the final.

The second Kazakh entered in the category, Magzhan Shamshadin (KAZ), also had a very good run in the preliminary rounds, while the son of Koga Toshihiko, the legend of judo, who passed away recently, Koga Genki (JPN), was expected at a higher level in Budapest, but saw his medal dreams fly away in the second round.

At the bottom of the draw, Yago Abuladze (RJF), already a winner in Budapest, during the Grand Slam in October 2020, came out without a scratch and ended up beating Shamshadin, to avoid a 100% Kazakh final.  Yago Abuladze fighting for the team of the Russian Judo Federation reached the final for men U60kg. In the semi final he defeated Magzhan Shamshadin of Kazachstan who the second man behind Kyrgyzbayev. Shamshadin will fight against Huseynov for bronze.Frenchman Khyar lost the semi final to Gusman Kyrgyzbayev (KAZ) another man we expected in the last eight. Kazakhstan is traditionally very strong in this category and Kyrgyzbayev had quite an easy ride to the semi final. One of the upsets of the U60kg tournament was Preciado's (ECU) convincing win in that pool against Tornike Tsjkadoea (NED) a low uchimata and a kosoto counter.

Francisco Garrigós of Spain is in good form but lost to Shamshadin in the quarter final. In the repechage he came back against Bulgarian Gerchev and will now fight for bronze against Walide Khyar. Shamshadin also defeated Jorre verstraeten (BEL) in the 1/8 final. Garrigos like his newaza. If someone like Garrigos a newaza man, you're in trouble once you're on the ground.

* Genki Koga, son of the last Toshihiko Koga lost to Kokolayev of Israel in the second round and triple world champion Naohisa Takato is missed at such championships full of surprises.

* It is the third time in a decade that a Russian lightweight reaches the final. Beslan Mudranov in 2014 and Robert Mshvidobadze in 2018 but both finished with silver.

* Gusman Kyrgyzbayev can become the second World Champion for Kazachstan in this category ever. In 2015 Yeldos Smetov won the title.

* Russia had only one world champion U60kg, in 1995 it was Nikolay Ozhegin who captured the world title. 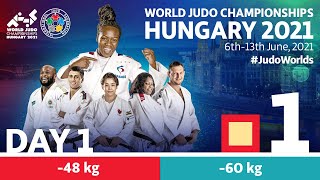 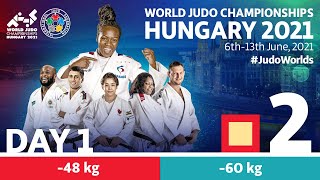 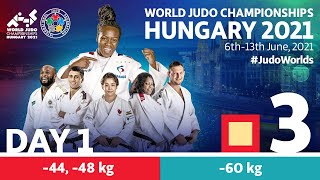