Next week the World Championships in Budapest will start while Covid-19 is still threatening the world, but judoka can still qualify for the Games. It will still be a great championship with a satisfying field. Oon Yeoh of JudoCrazy looked for the cherries at each weight category. This week we will give you an extensive preview on each weight category.

-60kg
Top favorite here is Ryuju Nagayama. The last non-Japanese to beat him was Lukhumi Chkhvimiani of Georgia, at the 2019 Tokyo World Championships but it was not a very convincing win. Nagayama had come in for an attack and ended up landing on his back. Chkhvimiani had done enough with his hands to guide him to the mat that it was considered his throw but many were shocked that a score of ippon was given.

In any event Chkhvimiani will not be in Budapest. And, as it turns out, the one player that Nagayama has had great difficulty with in the past, Ganbat Boldbaatar of Mongolia (who has beaten Nagayama twice) will not be competing in Budapest either. It looks like a clear path to victory for Nagayama.

-66kg
The top seed is Manuel Lombardo of Italy, who has shown his mettled defeating Hifumi Abe in the 2019 Paris Grand Slam. Some would argue he’s actually beaten Abe twice because at the 2019 Tokyo World Championships, he countered Abe for what looked like an ippon but this was no recognized by the video judges.

Lombardo’s definitely a top contender in this category but Joshiro Maruyama is competing and he’s likely to take the gold.

-73kg
It’s hard to imagine anyone else winning this category other than Soichi Hashimoto of Japan, especially with An Changrim of South Korea not competing.

-81kg
Matthias Casse of Belgium is the No. 1 seed but there are a few top contenders. Tato Grigalashvili from Georgia has been looking very powerful lately and of course you have Saeid Mollei (now fighting for Mongolia) who on a good day, can beat anybody in the world.

-90kg
Spains’s Former World Champion, Nicoloz Sherazadalishvili, is the top seed but the most exciting player in that category right now has to be Sanshiro Murao, who impressed everyone at the Kazan Grand Slam.

-100kg
At this weight class the top seed Is the veteran campaigner Varlam Liparteliani of Georgia but there are many others who could challenge him for the crown. In recent years, Toma Nikiforov of Belgium, Peter Paltchik of Israel, Michael Korrel of the Netherlands, Jorge Fonseca of Portugal and Arman Adamian of Russian have all managed to beat him. The two who are likely to give him most trouble though are Fonseca and Korrel. Still, we have to go with Liparteliani who despite his advanced years (he’s already 32), is still hungry because he has never won a world title despite coming close three times. This could be fourth time lucky for him.

+100kg
It would have been interesting to see Teddy Riner compete but alas he will not be. The two top guns to watch are Russia’s Tamerlan Bashaev and Japan’s Kokoro Kageura, who last year defeated Riner in the Paris Grand Slam. Both are in top form. They have fought each other twice with one win each. So, it’s really a toss-up who is more likely to come up tops.

get more sticky content from JudoCrazy and become a Patreon 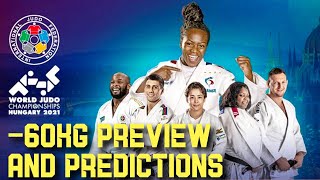 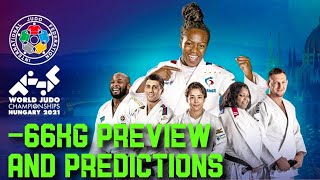