Inside news
Home News Not enough resistance for Funa Tonaki
Back

Not enough resistance for Funa Tonaki The Grand Slam in Kazan is the last qualifying event for the Olympic Games, before the World Judo Championships Hungary 2021, many athletes have made the trip to Russia to ensure the final points which could offer them a ticket to Tokyo. For others, this competition is a very good test, in view of the preparation for the next Olympic cycle and this is how we saw new names appearing in the prize list. For Funa Tonaki it was a finger practise.

Two-time world champion and silver medallist at the World Judo Masters last January, Tonaki Funa (JPN) was the ultimate favourite of the competition and she proved to be the strongest all the way to the final, where she was up against Irina Dolgova (RUS), who surprisingly defeated the 2020 European Champion Shirine Boukli (FRA), after a heavily disputed golden score in the semi-final.

In less than a minute, Tonaki, had scored a waza-ari, which was cancelled, but immediately followed to the floor with an osae-komi for ippon. With this clear and easy victory, the Japanese judoka proves that she'll be one of the favourites of the competition in Tokyo.

The Frenchwoman was left to aim for the bronze medal but due to an injury collected in the first round, also explaining why she was not on top form, demanded she retire from the tournament. Francesca Milani (ITA), winner of the Antalya Grand Slam at the beginning of April, concluded the day with a bronze medal.

Only 213th on the World Ranking List, Irena Khubulova (RUS) managed to qualify for the bronze medal match, against the Antalya Grand Slam bronze medallist Shira Rishony (ISR) and she only needed 16 seconds to score ippon with an uchi-mata to win a well deserved first medal at that level. 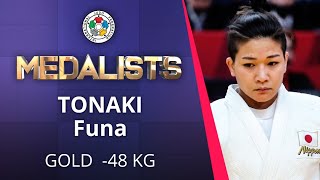 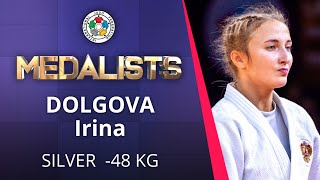 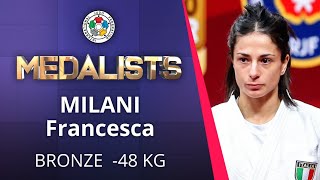