In the final for men U100kg Zelym Kotsoiev was the contender for former World Champion, Japanese Wolf Aaron, who trembled in the first round when he was led with a waza-ari by the Turkish Mert Sismanlar (TUR) before he scored ippon. Things are sometimes a little complicated when you have a right-handed and a left-handed competitor on the mat and the key is that opposite arm that seems impossible to reach. This is what happened between Kotsoiev and Wolf, but the Azerbaijani was clever enough to get one less penalty, to win a significant gold medal after a very good competition.

The first bronze medal match saw triple grand slam gold medallist Aleksandar Kukolj (SRB) who slowly seems to crawl back to an acceptable level in his relatively new category U100kg. Kukolj battles with Russian Arman Adamian who was third at the World Judo Masters at the start of the season. With one minute and 15 seconds remaining, Adamian scored ippon with a combination of ko-soto-gari and tani-otoshi, the kind of ippon that only the heavy weights can perform; massive, powerful, unstoppable, for a third grand slam medal for the Russian competitor.

In the absence of teammate El Nanas in the final block, Kyle Reyes (CAN) managed to climb into A fight for bronze, against Grigori Minaskin (EST), seventh in Tbilisi recently, but this was not a good day for Canada. Reyes was already on his back, thrown with a surprising kata-guruma, after only 9 seconds. This is a first bronze medal for Minaskin in a grand slam.

After the premature elimination of the number one seed, Shady El Nahas (CAN), who had probably not recovered from his victory in Tbilisi less than a week ago, the draw opened for Zelym Kotsoiev (AZE) who, in the first round, defeated the French Olympic medallist Cyrille Maret. Maret has obviously not yet reached his full capacity since a serious road accident in 2020. Seeing him again on a tatami is nevertheless a pleasure. 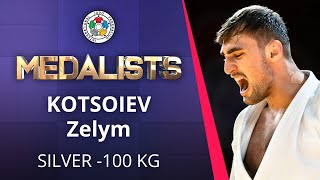 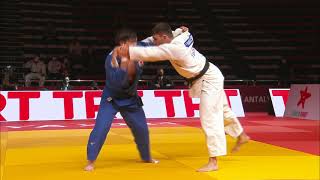 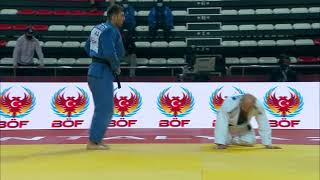