Dutch giant Kim Polling is no stranger, quite the contrary. Four times a winner of the World Judo Masters and a world medallist, the Dutchwoman found in the final another regular of the international podia, the Croatian Barbara Matic, second in Tashkent a few weeks ago and winner of the Hungary Grand Slam in October, which was the first event in the resumption of the World Judo Tour.

Kim Polling didn't give any chance to Matic! After having scored a first waza-ari with a reverse seoi-nage, she executed an almost perfect uchi-mata that was also awarded waza-ari, earning a fifth gold medal in a grand slam for the Dutch star.

Venezuela has a real school of judo, particularly among women. Elvismar Rodriguez (VEN) proved it once again by reaching the final block, where she was up against the rising star of Uzbek women's judo, Gulnoza Matniyazova (UZB), third at home not long ago, for the first bronze medal match of the category. This time Matniyazova was unable repeat her performance from Tashkent and during the golden score was thrown by Rodriguez for waza-ari.

For the other bronze medal, Maria Bernabeu (ESP), second at the 2020 Hungary Grand Slam, was opposed to Minel Akdeniz (TUR), only ranked 135 in the world before the event. After a golden score period Maria Bernabeu, who was dominating with a powerful grip but without adding the needed throw, finally pinned Akdeniz for ippon. This is the first bronze medal at a grand slam for Bernabeu, after she became world silver medallist in 2015 in Paris, only defeated by Gevrise Emane (FRA) in the final on that day. 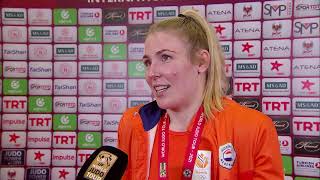 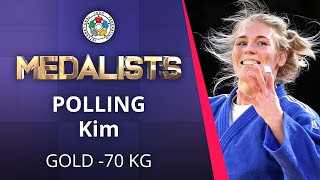 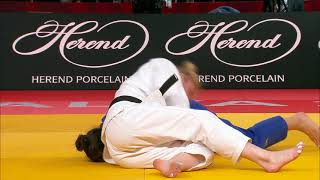