After one day of competition in Antalya, for the 2021 edition of the Grand Slam, we have five countries taking gold: Italy, Canada, Belgium, Japan and Uzbekistan. In Tashkent we saw the strength of the Asian countries stride on to the tatami and in Tbilisi new talent, but the whole year we see performances from Uzbekistan in both men’s and women’s division. In Antalya it is not different.

Fifth in Tel Aviv a few weeks ago, Estrella Lopez Sheriff (ESP) moved up a gear by qualifying for the final of the category, to face the 2015 cadet world champion and 2019 World Judo Masters bronze medallist, Diyora Keldiyorova (UZB), who confirmed the rise in power of Uzbek women.

In less than 30 seconds, Keldiyorova executed a perfect sode-tsuri-komi-goshi for a superb ippon, giving no chance to Lopez Sheriff to escape.

Gili Cohen (ISR) came to give the best of herself and to win a medal. Gold was undoubtedly her goal, but she had to settle for the bronze medal match against the Polish fighter Agata Perenc (POL), already holder of 6 medals at Grand Prix level, but none on the higher Grand Slam stage. It was the experienced Gili Cohen who ultimately won the medal and can go back home with a good taste of performance judo.

At home, Zeliha Cinci (TUR), without reference on the international circuit, managed to qualify for a bronze contest against the other Polish athlete in the category, Aleksandra Kaleta. Within 35 seconds Kaleta had already scored twice to win the bronze medal. 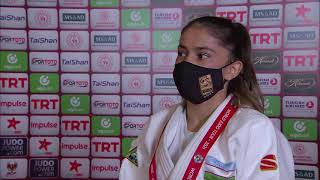 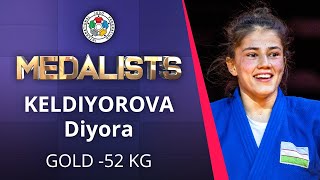 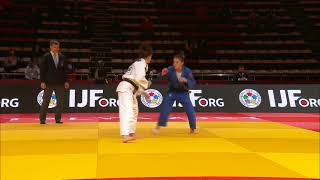