Many people wanted to see a Jeon Ki-Young vs Hidehiko Yoshida rematch after Jeon's world title in 1993 but back then, international competitions were a rarity. The IJF World Tour didn’t exist and there were no Grand Slams or Grand Prix where they could meet. Furthermore, the World Championships were also held only once every two years. Judo fans had to wait until the 1995 World Championships for that rematch to happen. But happen it did. Oon Yeoh writes about the best ever Korean judoka.

Both men were in top form although Yoshida had home-ground advantage. He stormed his way to the final using his trademark uchimata. Jeon meanwhile, tore through his first three matches with panache, throwing Peter Toncs of Hungary (the current coach of European Champion Hedvig Karakas) with uchimata, Miroslav Jocovic of Yugoslavia with drop morote-seoi-nage and Algimantas Merkevicius of Lithuania with a drop sode-tsurikomi-goshi.

He had a hard time with Nicolas Gill of Canada though. He opened up the accounts with a drop morote-seoi-nage for waza-ari. Gill replied with a huge osoto-gari that one corner judge wanted to give ippon for. But Jeon had landed largely on his side and waza-ari was correctly given. Gill was under pressure though as he was down on penalties. As he made a last-minute push forward, Jeon dropped under him with another morote-seoi-nage. That gave him a waza-ari-awasete-ippon win. Jeon was through to the final.

As was the case in 1993, Yoshida came across as the more confident of the two. And like the first time, it was Yoshida that did most of the attacking, knocking Jeon down with kouchi-gari and osoto-gari. There was no score though as Jeon managed to sprawl onto his front each time.

The fact that both players were left-handed made it difficult for either of them to do their favorite techniques. Jeon tried morote-seoi-nage a few times but to no avail. Yoshida made the crowd gasp when at the end of the mat, he came in with an uchimata attempt that had Jeon in the air. No score though as Jeon was able to ride the technique.

Yoshida was clearly ahead on attacks when Jeon sprung a brilliant combination, coming in with a drop sode-tsurikomi-goshi which Yoshida repelled. Then, instead of coming in with second drop attack, he stood up and drove into Yoshida with an osoto-gari that took the Japanese down onto his back. And with that, Jeon settled the question of whether he was capable of defeating a fully-fit Yoshida. The natural question on everybody’s mind though was does Jeon have what it takes to win the Olympics? 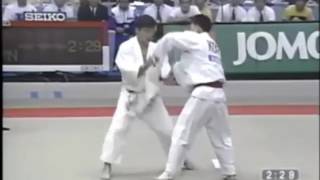 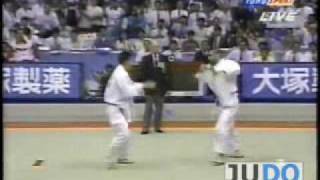 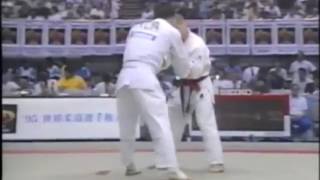