In every day and age, there are people who pioneer uncharted territory. They are often referred to as trailblazers. In this series, we look back on athletes who led the way for Japan and delivered unprecedented success for the nation. In the fifth part of this series, we focus on judoka Tani Ryoko (nee Tamura), who fought in five consecutive Olympic Games from Barcelona 1992, winning medals at all in the women’s 48kg.

“At last I’ve earned a gold medal, my long-held dream,” three-time Olympian Tani Ryoko said as she shed tears of joy after finally claiming a gold medal at the Olympic Games Sydney 2000.

The female judoka had at last reached the top eight years after since she made her Olympic debut at the age of 16.

Born in Fukuoka in 1975, she followed in her older brother’s footsteps and took up judo. Being strong enough to 'shoulder throw' opponents much bigger than her despite standing only 146cm, she was soon nicknamed Yawara-chan after a popular cartoon character, and gathered an army of supporters. She went on to become one of the most decorated judokas ever, with six consecutive World Judo Championships titles and five Olympic Games medals (two gold, two silver, one bronze) under her belt.

Tani’s first Olympics, the Barcelona 1992 Games, turned out to be a disappointment for her. In the final, the then teenager, made a decisive attack on France’s Cecile Nowak, who was 16cm taller than her, but was eventually forced to settle for a silver medal.

“I need to analyse why I was defeated,” Tani said.

In the four years that followed, she topped the podium in every competition she entered including the World Championships. Then came her second Olympics, Atlanta 1996, where she advanced to the final again as the anticipated gold medallist but had to settle for silver after losing to first-time opponent Kye Sun-hui of the Democratic People’s Republic of Korea due to a lack of strategy.

Disappointed, Tani consoled herself saying: “I guess I am only human.”

“Why is it that I cannot win in an Olympic final?” she asked herself.

Tani had repeatedly analysed the bouts she had lost during the four years between Barcelona 1992 and Atlanta 1996, where she could not claim victory in an Olympic final despite winning all other competitions. However, this made her change her thinking. Rather than trying to learn from the two Olympic battles she had lost, she decided to analyse the competitions she had won to identify her winning patterns.

“I don’t have much to learn from losing. I should uphold a higher goal by winning,” she said.

Before the start of Sydney 2000, Tani had the ambition of of earning “at best a gold, at least a gold”. Amid cheers from the crowd calling her name, she used an uchi-mata after just over 30 seconds to earn a decisive ippon against Russia Federation’s Lyubov Bruletova, gaining a clean-cut victory.

The petite judoka raised her right arm high and jumped with jubilation.

“It was such a long way to get here. I owe this victory to all the people who supported me. Winning the gold medal is a dream come true for me.”

Subsequently, Tani went on to claim a second gold medal at Athens 2004, followed by a bronze at Beijing 2008, becoming an Olympic medallist at five consecutive Games.

While dealing with all the pressure of her fame, Tani always remembered to express her gratitude to the people who had supported her. She kept holding high expectations for herself and turned the support and pressure into positive energy – surely this was a major factor in her many outstanding achievements. 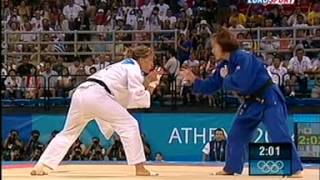 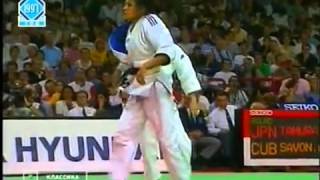