You may think that Portugal has quite an old successful team with Telma Monteiro (34), Rochele Nunes (30), Joana Ramos (38), Yahima Ramirez (40) and World Champion Jorge Fonseca (27) and finalist Barbara Timo have at least an experienced age. However looking into the future the Portuguese did a lot about recruiting new talent. Not just Patricia Sampaio who is more arrived, but true youngsters challenging at cadet or junior level.

Raquel Brito is 17 and the most promising cadet fighting U48kg. Pedro Lima is doing very well U81kg and Arthur Gottheiner who just turned 17 is a promise, now U60kg ad adopted in the Olympic project. Even pre-cadets like Rodrigo Janeiro (14) is competing at international level. They have one thing in common, their coach Pedro Dias. Nothing wrong with early recruitment in Portugal and the Olympian and European medallist of 2008 is now leading a new generation to the next level.

Oon Yeoh is truly JudoCrazy and spoke with the youngest at his 14th birthday; Rodrigo Janeiro.

JIC: How old were you when you started doing judo?

RJ: I was six years old when I started training judo at a club near my school under sensei Daniel Costa.

JIC: What did you think of judo at first?

RJ: My first impressions were good and I remember liking the various colors of the belts and the greetings on and off the tatami.

JIC: When did you start competing locally and internationally?

JIC: What are some of your most notable recent achievements?

RJ: I like the whole process, warming up, listening to my music, feeling the pressure, but most of I really like winning.

JIC: You're also training in BJJ?

RJ: Yes, and I compete too. I am national champion in jiu-jitsu for four consecutive years.

JIC: Are there a lot of training partners for you at your club?

RJ: Yes, because I train with the cadet team, where everyone is a competitor. I am lucky to be able to train with Arthur Gottheiner and Raquel Brito, both of them are in the Olympic project.

JIC: Don’t you find it difficult to balance all that training with your studies?

RJ: Yes, it is a little difficult because I go to bed late and wake up early. But this is part of the process if you want to become a champion. So, I have to be disciplined.

JIC: What are your favorite techniques?

RJ: For standing, the technique that I like most is ippon-seoi-nage. I feel comfortable doing this and it is very effective. For groundwork, I like sankaku the most because when done right, it’s hard to resist.

JIC: Who are your judo heroes?

RJ: My judo hero is Nuno Delgado who participated in the 2000 Sydney Olympics and won a bronze for Portugal.

JIC: When was the last time you did judo?

RJ: The last time I did judo was on March 13 at my club. Only three judokas were there: Arthur, Raquel and me. And of course, my sensei, Pedro Dias.

JIC: Are you still in lock-down? Do you know when you can resume judo?

RJ: Starting this month, the government allowed outdoor training for a maximum of five people. No physical contact allowed. We do physical training outdoors. Maybe in June we can train on the tatami but probably still without physical contact and with masks on. Still, I look forward to that.

JIC: What does judo mean to you?

RJ: It’s a hard question to answer. What I can say is that it’s a burning passion that makes me dedicate my body and soul to it. My goal is to win an Olympic medal someday. It would certainly be interesting to look back at this interview years from now!

JIC: Raquel Brito and Arthur Gottheiner even live in the house of Pedro Dias who made a dojo of garage so both can train. Dias organises many online webinars via social media even including one of his friends Tiago Camilo of Brazil. They all use Athlete Analyzer.

This is the time to team up. You can benefit by going here. 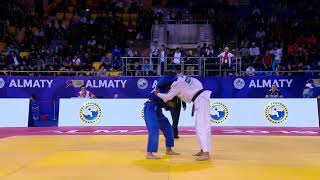 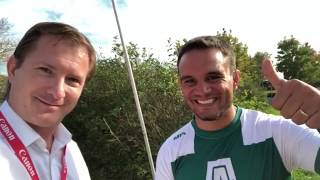 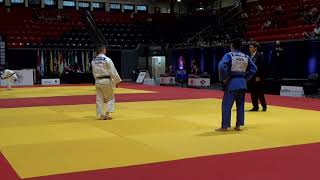