Inside news
Home News Judo in the time of Covid-19: Martti Puumalainen
Back

Judo in the time of Covid-19: Martti Puumalainen Finnish judoka Martti Puumalainen won a silver medal at the European Youth Festival - EYOF in Utrecht in 2013 U90kg. He won many prizes in his region and was a super talent and part of a new generation for Finland, maybe the best generation ever but they realised that reaching the top in a country like Finland is really tough. Martti won various national titles in all age categories but remained a star in the Nordic but since last year he had a breakthrough. His bronze medal in Sofia this year and European U23 Championships bronze brought the heavyweight to the next level. Just when the lockdown was introduced but at least he can ski! JudoCrazy’s Oon Yeoh asked him all about it.

JIC: How’s the Covid-19 situation in your country?

MP: In Finland, the situation is not that bad compared to many other countries. Nevertheless, all judo clubs are closed, as are most of the public gyms and sport halls. Some of the top judo athletes are permitted to access training halls though.

JIC: How are you coping with the lock-down?

MP: When the lock-down first started, I went to Lapland with my dad and did cross-country skiing for one month to improve my cardio, which I felt was not at the level it should be after I gained about 20kg after changing categories. I also bought some kettlebells to do some strength training. I guess during these times, willpower and imagination are two key words if you want to improve.

JIC: Last year, you moved up from -100kg to +100kg, which seems to be the trend now among many -100kg players. What made you decide to hop on this bandwagon?

MP: I had to cut too much weight to make the -100kg category and I felt that this affected my performance in competitions. Honestly speaking, it made me not enjoy judo anymore because I had to suffer too much just to make weight. I saw a lot of guys formerly in the -100kg division make a successful jump to +100kg, so I figured this is something I could do too. Today, I feel it’s the best decision I have ever made with regard to my judo.

JIC: What’s your normal training like, before the lock-down?

MP: I train about eight times a week. I know in other countries they train more often but in Finland it’s a bit hard because there are not so many suitable training partners for me, especially as a heavyweight. I only get to do judo about three to five times a week, depending on the attendance at the judo club. The rest are strength and conditioning sessions. I wish I could do more judo but there just aren’t enough training partners to do that.

JIC: Does this frustrate you?

MP: Of course, I wish I had more randori partners but I really don’t want to cry about this. I try to work with the things I have than wish for something I don’t have. Besides, I think it improves my movement when I train with the smaller guys because they move more quickly than heavyweights. I read somewhere that Teddy Riner also does some training with smaller partners for this reason.

JIC: Can you describe the judo scene in Finland?

MP: In Finland there are lots of clubs but the level of clubs varies a lot and the teaching can be completely different from one club to another. In Finland most of the coaches are volunteers. I feel that this the biggest thing that need fixing if we want the level of competitive judo to rise.

JIC: How do you feel about the future of Finnish judo though?

MP: Overall I’m optimistic. We have a good group of young judokas born between 1997 and 2000 who are showing great potential. I am very positive about the future right now.

JIC: In certain countries, judo is really only for competitors and you don’t really have many adults doing judo for fun. What about in Finland?

MP: Over here we do have recreational judo and I’m always happy to see older people come for judo training and enjoying themselves playing this sport.

JIC: Can you tell us a bit about your judo club?

MP: I’m based in Helsinki and my club is called Meido-kan. I feel it’s the best club in Finland. The people who work in the club are constantly trying to develop the organisation and make it more professional.

JIC: How did you get involved in judo in the first place?

MP: I started when I was six. At first, it was just another activity for me. I went to judo class because my parents enrolled me for it. I participated in my first competition when I was eight years old and lost to two girls. After I did not fight for two years but the next time I competed, I got a gold medal. Suddenly, I fell in love with the sport and fighting.

JIC: When did you decide you wanted to compete internationally?

MP: It was when I was 13 or so. I remember deciding to aim for the top because no one really noticed me even though I was winning all the local competitions in my age group. So, I thought maybe I should aim for something bigger and go for international events. To prepare for this I would go for training camps where I would get beaten up because everybody was more senior and more experienced than I was. But this only served to motivate me more.

JIC: Do you recall your first few international competitions?

JIC: Do you watch judo videos to analyze opponents and to learn techniques?

MP: I watch judo videos every day. Not so much to analyze opponents but to learn new techniques. I like to see how other judokas do their techniques, create openings, search for a grip etc.

JIC: Why not analyze potential opponents?

MP: I feel that analysing your opponents too much is not good for you. Before the fight you should not think too much about what your opponent can do but rather, have faith in your own judo. Of course, it makes sense to know a little bit about your opponent, like whether he’s a righty or lefty, etc but you don’t have to analyze him to death.

JIC: Do you follow closely all the Grand Slams and Grand Prix?

MP: I follow them very closely. I watch all the IJF World Tour events and if I don’t get to see them live, I will watch the recorded versions later.

JIC: What are your short-term goals?

MP: The Europeans in November is my near-term goal. I don’t really know what to expect of that right now though. They might be postponed. I was a bit sad to see so many events postponed because I felt I was improving a lot recently but of course given the Covid-19 situation, there is no other choice but to postpone.

JIC: How about long-term goals?

MP: In terms of Olympic qualifications, I’m far from having qualified but now with the postponement of the Games by one year, who knows… maybe I might have a chance. But my real target is the 2024 Olympics in Paris.

JIC: What are your favourite techniques?

MP: My absolutely favourite technique is drop ippon-seoi-nage. When I was kid and I heard about one guy, Aku Laakkonen, who did only drop seoi-nage — nothing else — and won all of his fights in the U13 age group. I was about 11 or 12-years old at the time and I thought this throw must be some kind of magic trick allows you to throw all your opponents. In my next competition, I tried it and immediately scored an ippon. Since then, it’s been my tokui-waza. I also do other variations of seoi-nage like morote-seoi-nage and reverse seoi-nage. Related throws like sode-tsurikomi-goshi and kouchi-gari are also in my repertoire.

JIC: Any technique you tried to master but couldn’t?

MP: For me it’s tomoe-nage. I don’t know why but this technique just doesn’t work for me. I have been in training camps were Craig Fallon and Martin Pacek taught this technique but still, I was not able to master it.

JIC: Are you studying as well or just training full-time in judo?

MP: I consider myself to be a professional athlete but I am doing a course in business economics. Judo is my main thing but, as we all know, anything can happen in judo so you need to have a back-up plan in case your competition career is interrupted.

JIC: Are you a sponsored by the government?

MP: In Finland, the government does not directly sponsor athletes but funding comes from a gaming company owned by the Finnish state called Veikkaus, which operates all the gambling games that are offered in Finland. After I got a bronze medal at the U23 Europeans last year, I received better funding. Before that, I had to pay for almost everything myself.

JIC: Any words for judokas out there who are under lock-down?

MP: Try to make the best out of this difficult situation. Remember, if there’s a will, there’s a way. So search for different ways to train despite the constraints and get to work! 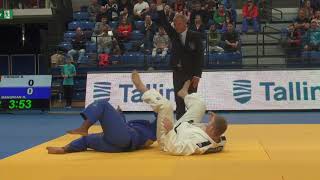 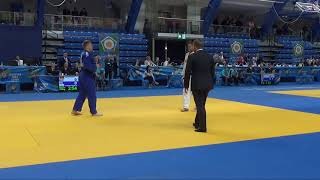 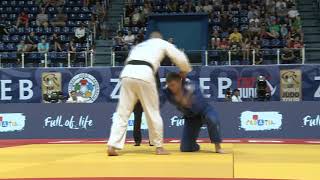