Shirine Boukli of France, a relative unknown until 2020, gave double World Champion Daria Bilodid the shock of her life in the 2020 Paris Grand Slam semifinal where she took the Ukrainian all the way to Golden Score and very nearly defeated her. In the 2020 Dusseldorf Grand Slam she met Funa Tonaki, another World Champion, in the final and this time she emerged the victor. French judo has a new rising star. JudoCrazy’s Oon Yeoh interviewed her.

JIC: Can you tell us how you got started in judo?

SB: I started judo when I was four years old, at my uncle’s club called Aramon Judo Club. I come from a judo family. My father, brothers and cousins — we all practice judo. I remember receiving my kimono (judogi) for my fourth birthday.

JIC: What was training like at Aramon Judo Club?

SB: It was really competitive. I trained mainly with boys and my uncle used to enter me in competitions against boys because he thought it was too easy for me to fight girls. The dojo was located right in front of my school so it was convenient for me to go there after school. I used to train from 5pm to 8pm, three or four times a week. After training, I would stay back in the dojo and do tai so (calisthenics) with my mother. On Saturday mornings there was free practice, so I would go there to train with the people doing BJJ or do some judo with my brothers. It’s at that club that I developed my judo fundamentals. I was with the club for 13 years, so I really grew up with the club.

JIC: What was your journey towards international competition like?

SB: In France there is a system called “Pole”. First you have Pole Espoir and they are located in a lot of places across the country. I entered Pole Espoir at the age of 15. Then, you have Pole France, of which there are four of them, in Marseille, Bordeaux, Strasbourg and Orleans. I joined that when I was 16 years old. After that is INSEP, which I joined at 17. All of these are sports schools, so you attend academic classes as well as practice judo.

JIC: Is this the only way a French player can get to international level?

SB: It’s the most common way but it is still possible to get to INSEP without going through the Pole system. Loic Pietri (2013 World Champion), for example, went from his home club straight into INSEP. But there are a lot of advantages to going through the Pole system. You get to go to training camps and competitions that you otherwise would not get a chance to go to. There are also many strong randori partners for you to train with.

JIC: You are now with the Flam 91 Judo Club?

SB: Yes, I’ve been with Flam 91 since 2016. I have two coaches, Kilian Leblouch and Florent Urani. I’ve learned a lot from them and it’s going really well. I really love it there. The atmosphere is great, we laugh a lot, and we support each other to achieve our greatest ambitions. It’s become more than just a club. For me, it’s really like a family.

JIC: Do you just do judo or are you a student as well?

SB: I am also a student. I am in my second year of studying for my Science and Technique of Physical and Sport Activities license. Eventually I’d like to go into physiotherapy.

JIC: What was a typical day like for you before the lock-down?

SB: I start my day with classes at INSEP from 8am to 9.30am. Then, I go to the dojo to do some physical training for one hour. After that, I head home to get some food to eat. I’m back at INSEP for another class from 2pm to 3.30pm. Then, I head to the dojo again for some judo training. This usually lasts from 5pm to 6.30pm or 6.45pm. After that, I go home. So that’s my daily schedule.

JIC: How much randori do you do per day?

SB: It depends on the coach who is in charge on that day but I’d say typically about five or six randoris per session. I think randori is the most important aspect of training because it allows you to put what you’ve learned into practice. By trying the techniques in randori, you’ll learn how to do them in competitions. The time for making mistakes is during randori, not during competitions!

JIC: Now that you’re in lock-down, what’s your daily schedule like?

SB: It’s a little bit less regimented. For example, this week I trained just once a day but last week I trained twice a day. At home I have the necessary equipment for training. I do cardio, circuits, strength training, and with my brothers, I’m able to work on kumi-kata (gripping) and uchikomi.

JIC: What things do you do when not training?

SB: I do a bit of homework, play with my dog, bake cakes and watch TV series and movies.

JIC: When fighting, you favour a deep right-handed grip. From there, you do a very deep hip throw and sumi-gaeshi. Is this something you developed yourself or did your coach advise you to adopt this grip?

SB: It’s something I had been doing since my early days at my uncle’s club. Actually, it’s something that came naturally, it wasn’t something I specifically trained up for but my uncle notice that this was a strong point of my judo. So, we did a bit of work to develop it further.

JIC: Normally a lot of lightweights at -48kg will do drop seoi-nage but you don’t seem to favour that at all. Is it because your favorite grip is not suitable for seoi-nage?

SB: In training I have done some work on seoi-nage but it’s not really a movement that I have a good feel for. But you’re right, my gripping style does not favour seoi-nage at all. As you’ve noticed, it’s more suited for hip throws and sumi-gaeshi.

SB: I worked on this movement under the guidance of my coach Kilian Leblouch, who really likes this technique. We worked on various directions and angles to roll into osaekomi from the initial arm-grip on uke. After he initially showed it to me, I liked it straight away and did a lot of newaza uchikomi on it.

JIC: Normally does your coach recommend techniques to you or do you go to them with techniques you want to learn?

SB: Both. I can always go to them and ask for advice on a specific technique but sometimes the coach might see something interesting and recommend that I pick it up because it’s something that would work well for me.

JIC: You’ve been fighting internationally since 2015 but really came to prominence this year. In Paris, you almost created an upset in your match against Daria Bilodid, knocking her down a few times and very nearly scoring. How did you feel going into the fight, during the fight and after the fight?

SB: Before the fight, I was very determined. I had some good matches in the preliminaries so I went into the semifinal feeling good. During the fight, I initially had some problems with her grips but as the fight progressed, I felt I was managing the situation quite well and was able to put in a few good attacks. My thought at the time was I had to take the initiative, I had to take the fight to her. In Golden Score she was already down by two shidos so I continued my attacks but in the end, I got caught by her kosoto-gari. After the fight, I felt angry with myself because I had fought well for most of the match.

JIC: In Dusseldorf, you defeated the Funa Tonaki, another world champion, in the final. How did that match feel compared to the one you had with Bilodid in Paris ?

SB: Well, my approach was exactly the same, which was to take the initiative, get my grip and attack aggressively. The main difference between Tonaki and Bilodid is the height. Tonaki is shorter, and therefore easier to get a grip on. It was a lot harder getting that grip on Bilodid because she is so incredibly tall.

JIC: In terms of Olympic points, you have enough to qualify but there is another French girl, Melanie Clement, who is higher in the rankings. You haven’t fought her in international tournaments but have you fought her in domestic tournaments?

SB: Yes, I’ve fought Melanie twice already in the French National Championships. In 2016, I lost to her in the quarterfinal and in 2018, I beat her in the final.

JIC: Prior to the onset of the Covid-19 crisis, it was thought that you were aiming for the 2024 Olympics. Now that the Games have been postponed by a year, are you going to readjust your sights for 2021?

SB: For many athletes, the postponement is a kind of disappointment but for me, it’s a good opportunity because it means I now have more time to prepare for the selections. Before this, I was mainly thinking about 2024 but now I think 2021 is a possibility.

JIC: What would you like to say to other judokas who are in lock-down?

SB: Continue to be serious about your training, make full use of the time to do some training at home even though the situation is not ideal. It may make a big difference to your judo once the situation goes back to normal. Also, take good care of yourself and your family.

The IOC postponed the Olympic Games until 23 July 2021, the U48kg event will take place at the first day at the 24th. 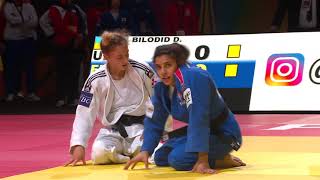 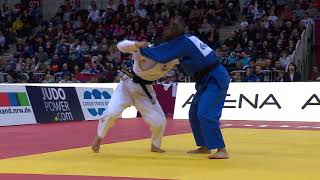 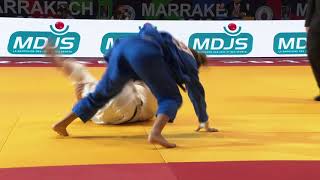