The first male final at day two in Tel Aviv was a final between regulars of major events since it opposed the 2018 European Champion, Ferdinand Karapetian of Armenia and the Olympic champion U66kg Fabio Basile of Italy. With a serious run in the preliminary rounds, the Italian returns to his top level at the best time while the final stretch before the Tokyo Games is now wide open for all athletes. Due to an injury Ferdinand Karapetian couldn't compete

Fabio Basile won the title and received a standing ovation while leaving the tatami with a big smile on his face. This is the magic of being an Olympic Champion and being Fabio Basile.

The first bronze medal was disputed between the other Italian of the category, Giovanni Esposito, Cadet World Champion in 2015, and the Slovenian Martin Hojak, world junior medalist in 2015. In less than 10 seconds Hojak scored a first waza-ari, followed by a perfectly executed ground work concluded with a shime-waza for ippon.

In the second bronze medal match, Nils Stump (SUI), bronze medalist in 2018 in Tbilisi, was opposed to Salvador Cases Roca (ESP) who, whatever would happen as he stepped on the tatami, was guaranteed to achieve his best result on the World Judo Tour. Stump needed a little less than 2 minutes to execute a perfect uchi-mata for a clear ippon to win his second medal at a Grand Prix. 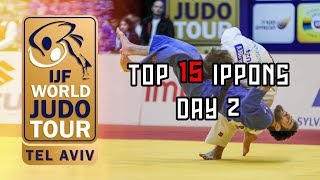 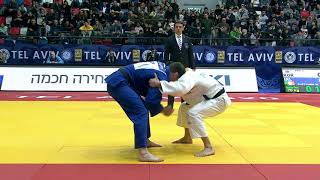 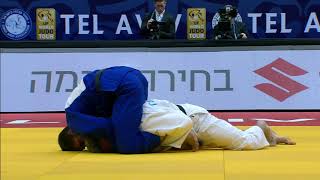