Double world champion Daria Bilodid of the Ukraine won her third Grand Slam title in as many Grand Slam outings as the Ukrainian teenager was unstoppable in Abu Dhabi. European Games bronze medallist Marusa Stangar (SLO), who holds a 2016 win over the prodigy, struggled to offer any resistance and could not escape a sankaku-gatame hold as Bilodid rushed to glory in the first final of the competition.

In the first semi-final Bilodid pipped world number 21 Sabina Giliazova (RUS) by a waza-ari score for a narrow victory as the Russian did well to take the contest the distance.

In the second semi-final world number 15 Laura Martinez Abelenda (ESP) was held down by Stangar for 10 seconds in golden score to seal a place in the final.

The first bronze medal contest was won by world number 19 Katharina Menz (GER) who dropped under Martinez Abelenda with 11 seconds left with a seoi-nage for a waza-ari score and her opponent had no time to respond in the opening contest of the final block.

The second bronze medal was won by Brasilia Grand Slam winner Catarina Costa (POR) who outworked Giliazova to secure a place on the podium in Abu Dhabi. Costa broke the deadlock after just 22 seconds with a waza-ari score and did just enough to remain in front of her Russian opponent until the time ran out. 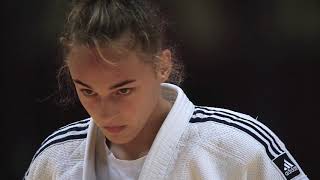 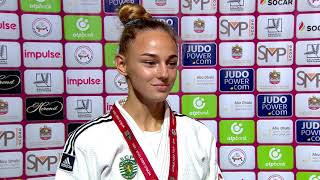 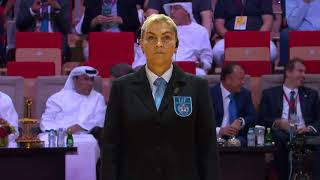