Gold backpatches will be everywhere in Abu Dhabi this week at the Grand Slam. Rio 2016 Olympic champions are now just months away from defending their crowns in Japan and are stepping up their bids to defend their titles by entering the toughest competitions on the circuit.

Majlinda Kelmendi (KOS) will compete on day one while Fabio Basile (ITA), Tina Trstenjak (SLO) and Khasan Khalmurzaev (RUS) will be in action on day two.

Here are their respective records in Abu Dhabi:

Olympic champion Majlinda Kelmendi and Olympic silver medallist Odette Giuffrida of Italy have one of the longest running rivalries on the IJF tour which goes back to 2013 and has seen them square off in Grand Prix and Grand Slam finals in addition to the Rio 2016 gold medal contest.

Kelmendi leads their head-to-head series 6-2 which Italy’s Giuffrida claiming her two wins over the Kosovo star in 2013 and one year ago here in Abu Dhabi.

Their 2018 Abu Dhabi final was unfortunately settled by kiken-gachi as Kelmendi could no longer continue after the nose bleed for the former world champion showed no signs of abating and with 45 seconds left had to concede the contest.

Giuffrida was highly-excited on the podium and sang her anthem with typical Italian gusto, an image which has stayed with Kelmendi, who despite beating her rival in Düsseldorf in February, will be looking to extract further revenge on Thursday and at the scene of her frustrating defeat 12 months ago. 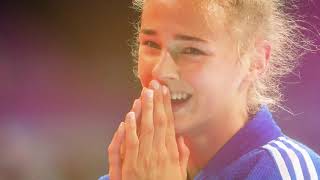