For the third consecutive Grand Prix this year Canadian Jessica Klimkait pocketed a medal. Bronze in Hohhot, silver on home ground in Canada and the gold medal in Zagreb, her first Grand Prix gold among her twelve World Tour medals. In the final Klimkait Momo Tamaoki of Japan who was disqualified due to a forbidden and risky throw on the wrist of Klimkait.

The winner said to the IJF: “It’s a really nice feeling and also a good progress to see myself mounting the podium each event,” Jessica Klimkait told IJF Media in the Mixed Zone. “Obviously, the win here is a bit bittersweet due to the hansoku-make disqualification of my opponent. However, that doesn’t take away how I felt about myself today: strong and hitting all the points I wanted to score. It really still feels like I won today.”

Winning that gold in the last straight line towards the Worlds is a genuine confidence booster for the Canadian athlete. “Every competition I wanted to feel the way I felt today. So, it’s really nice to have everything click in the right way, hardly a month away from the Worlds. It’s a good feeling to have,” she ends.

Her rival Christa Deguchi got injured in a training on her foot and wasn’t fit enough to start against Eteri Liparteliani. The Georgian though surprised and won her poule. Tamaoki won her poule and defeated Liparteliani in the semi-final. Sarah Leonie Cysique was in good form and defeated Theresa Stoll in her first contest but ended with a fifth place as Nekoda David captured the bronze medal. Davis returned successfully after an injury. 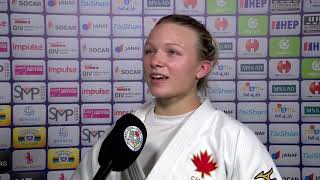 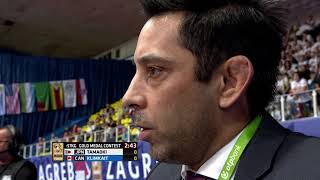 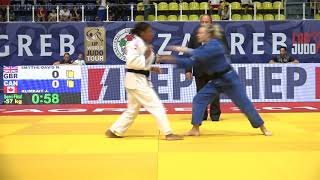