Former world champion Tonaki Funa of Japan was pushed all the way by Antalya Grand Prix winner Distria Krasniqi (KOS) in a U48kg thriller in the first final of the Grand Prix in Budapest. World Championships contender Tonaki opened the scoring with a waza-ari before being caught with a uchi-mata for a waza-ari score on the edge of the area. In golden score, Tonaki had the edge as she pinned down her rival from Kosovo for 10 seconds and U48kg gold.

In the first semi-final London 2012 Olympic bronze medallist Csernoviczki Eva (HUN) lost out to Tonaki despite scoring early on as the Japanese kept composed and fought back to win by ippon. In the second semi-final Krasniqi rushed past European Games bronze medallist Julia Figueroa (ESP) by ippon in 47 seconds.

The first bronze medal contest was won by Figueroa who avenged her Baku Grand Slam final loss to teammate Laura Martinez Abelenda (ESP). Figueroa employed her seoi-nage to score a second and match-winning waza-ari in the opening contest of the final block in Budapest.

The second bronze medal was won by Tel Aviv Grand Prix silver medallist Maryna Cherniak (UKR) with an o-uchi-gari after 17 seconds of golden score as home judoka Csernoviczki left the mat in tears. 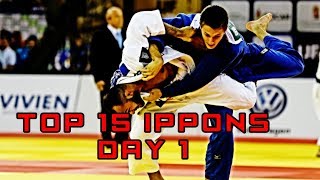 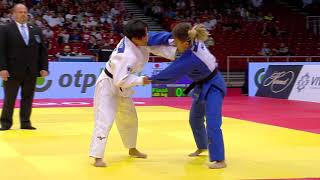