Young and old will battle for the European Games title U48kg in Minsk. However there are no doubts with the fans that one of the youngest, Daria Bilodid, is the biggest ace to win the title. Bilodid won the European title in 2017 and looking back at the history this class has waves with successful women. Karen Briggs and Sarah Nichilo are big names from the past, Alina Dumitru won it eight times (2004-2012) for Romania and is topscorer.

Eva Csernoviczki (HUN) won twice in 2013 and 2014 and is still competing. She won eleven European medals in a ROW, can you imagine! Never count her out. Since 2012 Charline van Snick was in the European final four times, the Belgian captured the first European Games title in 2015 and won in 2016 just before the new Bilodid era. Van Snick now competes U52kg.

The current European champion is Russian Irina Dolgova. If she is fit enough to stand the World Champion is a good question, but Russians can peak at the right time. Dolgova won bronze in Ekaterinburg but it’s not a clear indication of strength.

Nine IJF World Tour events U48kg delivered nine different winners this year. Five of them European victories for France’s Melanie Clement in Tbilisi, Shira Rishony in Tel Aviv and Distria Krasniqi of Kosovo who will definitely aim for a first European title for Kosovo in this class.

The surprise came from Spain, where a good competition is going on between Marrakech winner Julia Figueroa and Baku winner Laura Martinez…. Against Figueroa. Again the new kids are booming in this class and that was about time. One sentence back in history, Yolanda Soler won this title three times in the nineties, perhaps she can inspire the Spaniards to make the impossible possible. Melanie Clement showed how to escape from the world domination of Bilodid.

You guys want some more names? No problem, there are a few other challengers: Milica Nikolic of Serbia is performing consistently and already won the first European medal ever for Serbian and it tasted so good. Andrea Stojadinov (SRB) doing really well in the slipstream of Bilodid as she won World Junior bronze last year. Marusa Stangar (SLO) is getting close to the top, Catarina Costa (POR) can do miracles at a good day. Never rule out Maryna Cherniak (UKR) who was in the final in Tel Aviv’s Grand Prix. 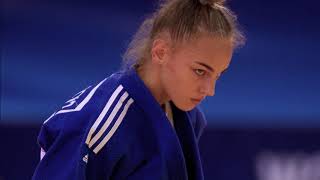 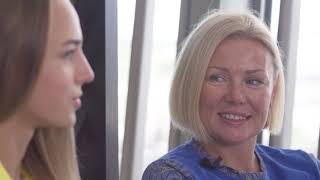 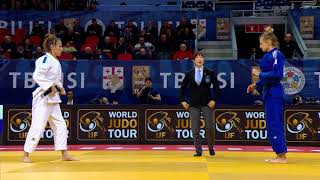