The Cuban star wrapped his left leg around his Georgian adversary on the edge of the area for a waza-ari score to win gold.

The first bronze medal was won by Asian Games silver medallist Gantulga Altanbagana (MGL) who squeezed past Bobonov by a waza-ari score from a uchi-mata-sukashi in the opening contest of the final block.

The second bronze medal went to Gviniashvili who defeated 2017 world champion Nemanja Majdov (SRB) after 62 seconds of golden score. Battling Serbian Majdov went into golden score in all five of his contests and won four of them before meeting his match in Georgia’s home star. Gviniashvili threw with a sasae-tsurikomi-ashi for a waza-ari score and his immensely disappointed opponent was quick to pay tribute to his rival as both men shared a shared a smile and the former raised the hand up of his opponent to a standing ovation from the Georgian faithful. 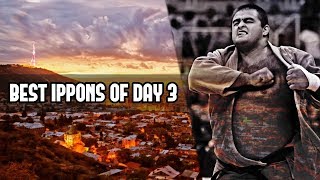