Cancun Grand Prix bronze medallist Figueroa screamed with pleasure after a key win against an opponent with who she has struggled to overcome in their head-to-head series which now sits at 4:3 in the favour of the Romanian.

In the first semi-final former Madrid European Open winner Francesca Giorda fell to Figueroa by ippon in golden score. In the second semi-final Ungureanu defeated Tbilisi Grand Prix bronze medallist Melanie Clement (FRA) who received her marching orders after gripping on one side for too long without attacking in golden score which was her third shido.

The first bronze medal contest was won by world number 16 Clement who thwarted Tel Aviv Grand Prix gold medallist Shira Rishony (ISR) in golden score. Rishony was dismissed after her third shido for passivity as her French victor clapped her crucial medal win which will for now solidify her place inside the qualification spots for Tokyo 2020.

The second bronze medal was won by Ekaterinburg Grand Slam bronze medallist Katharina Menz (GER) who threw Giorda with an uchi-mata for ippon in golden score. 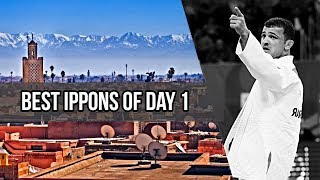