Germany's Dominic Ressel won Grand Slam gold for the first time as he defeated Tel Aviv Grand Prix winner Sagi Muki (ISR) by ippon for U81kg gold. Ressel countered his in-form rival for ippon and the best result of his career. It was for the first time since Ole Bischof captured gold in Paris in 2012 that Germany celebrated a gold medal.

In the first semi-final Grand Slam debutant Ruslan Mussayev (KAZ) was humbled by Muki. In the second semi-final and The Hague Grand Prix bronze medallist Ressel outfought Olympic champion Khasan Khalmurzaev (RUS) who was giving his marching orders after picking up three penalties.

The first bronze medal was clinched by world champion Saeid Mollaei (IRI) who emphatically bested Khalmurzaev by two scores. Iran’s second world judo champion reaggravated a longstanding injury while executing his winning throw and was helped off the mat by his Russian adversary.

Germany was close to the best performance ever with silver for Luise Malzahn U78kg.

The story of the gold medal by Ressel was somewhat overshadowed by the likely deliberate loss of Saeid Mollaei of Iran against his Azeri opponent to prevent fighting against Muki of Israel. Also Mollaei wasn't at the podium where the Israeli and Iranian flag both waved in Bercy. The matter will be investigated by the IJF.

IJF President Vizer reacted: "We will seriously analyse the case because it's not easy to explain from the methodological point of view how the athlete lost the contest. It's a very complex situation. TBH, a part of the sport impact sometimes in the life you have to consider a lot of different aspects."

"The risk and the precaution for the family members and himself. The contradiction between the wish of our athletes and the system where he belongs. As well you know well that as an individual to break a system, especially in his country, it's nearly impossible." 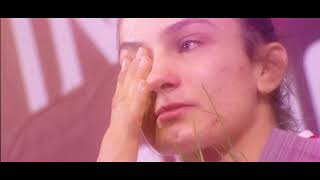