French European champion Madeleine Malonga won her home Grand Slam for the first time as she defeated Tashkent Grand Prix bronze medallist Luise Malzahn (GER) after two minutes. Malonga opened the scoring with a waza-ari from an o-soto-gari and the final was settled when her German rival was penalised for going out of the area which was her third indiscretion.

In the first semi-final Osaka Grand Slam gold medallist Sato Ruika (JPN) was stunned by Malonga who threw beautifully with an o-soto-gari for ippon.

The first bronze medal was claimed by Chen who won an epic battle with Tel Aviv Grand Prix bronze medallist Katie-Jemima Yeats-Brown (GBR). Both judoka failed to trouble the scoreboard in regulation time and an additional six and a half minutes of added time was required to produce a winner as Chen threw with a makikomi effort for a waza-ari score.

The second bronze medal contest featured former world champion Umeki Mami (JPN) and compatriot Sato and the contest went in the favour of the former. Umeki held down Sato in golden score for 20 seconds and ippon to claim her fifth Grand Slam medal. 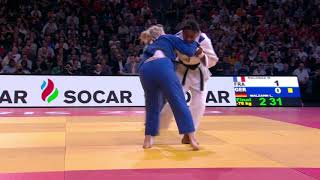 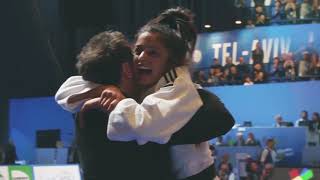