The rematch of the Rio 2016 Olympic final closed out a thrilling first day of competition in style as both champions gave their all in Paris. Gutsy Slovenian Trstenjak more than matched powerhouse Agbegnenou in regulation time and for three minutes of golden score until the three-time world champion and owner of the red backpatch rolled over the owner of the gold backpatch for a waza-ari score and France’s first gold medal at home this weekend.

The winner said: "I hurt my shoulder at the end of the day, on my last action, the one that gave me the victory. I do not know exactly what it is. I will have an MRI tomorrow and we will advise. I had trouble getting started early in the day because I had trouble concentrating on my judo. I must say that I had a big week of training. I did activities that were not necessarily judo oriented. It was useful to take a little distance, but at the same time it complicated my task in the first matches."

"This fifth title in Paris is simply great. It puts pressure on my opponents, who realize that I am the leader of the category. This psychological ascendancy is important. As the day unfolded, I became aware that the public had come to see me. The public was sheering more and more. On the one hand, it makes my heart warm, but at the same time, I said to myself: oh yes, no choice... It added a little pressure." 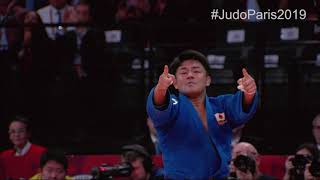