Dutch judo legend Henk Grol rolled back the years to win heavyweight gold in the last contest at the Osaka Grand Slam. Grol, who went out in the first round at The Hague Grand Prix a week ago at the hands of Alexander Mikhaylin (RUS), renewed his rivalry with U100kg Olympic champion Lukas Krpalek (CZE) which started in 2009 when they faced off for the first time in the U100kg category.

Two-time Olympic bronze medallist and Abu Dhabi Grand Slam bronze medallist Grol utilised his ashi-waza to great effect as he caught Krpalek with a ko-uchi for a waza-ari score and his first gold medal on the IJF World Judo Tour since 2014 (Budapest Grand Prix). There was no way through for Krpalek with his sutemi-waza as Grol was alert to the threat throughout their final and the Dutchman backed up his opening win over world champion Guram Tushishvili (GEO) with gold.

In the first semi-final Cancun Grand Prix bronze medallist Tamerlan Bashaev (RUS) lost out to the veteran Grol by a waza-ari from a sasae-tsurikomi-ashi. In the second semi-final Paris Grand Slam gold medallist Kageura Kokoro (JPN) had to tap out to Krpalek in golden score from a juji-gatame.

The first bronze medal was won by Kageura who threw 2008 Beijing Olympic champion and London 2012 Olympic silver medallist Naidan Tuvshinbayar (MGL) for the maximum score after two minutes of golden score. Naidan, who was Olympic champion a decade ago, in a different weight category, under a different set of rules, showed his longevity once again but came up just short in his bid for a place on the podium after Kageura sent the Mongolian over with a harai-makikomi.

The second bronze medal went to Bashaev who dispatched World Championships bronze medallist Ulziibayar Duurenbayar (MGL) after 90 seconds of golden score. Russia’s Bashaev sent his Mongolian adversary over with a morote-seoi-nage for ippon to secure his second medal in a Grand Slam. 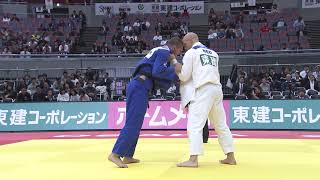 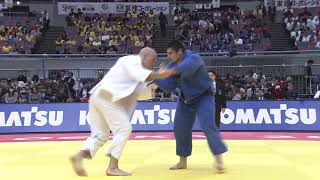 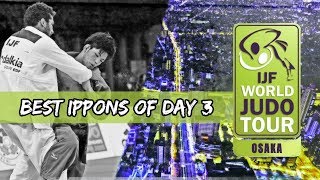