With no real surprise, Olympic champion, Majlinda Kelmendi of Kosovo was present in the final for the second event in a row after Abu Dhabi Grand Slam two weeks ago. This time she caught the gold medal at the Grand Prix in Tashkent where in Abu Dhabi she lost to Giuffrida after she had to 'throw the towel' in the final

Kosovo’s hope was opposed to top seeded Swiss athlete Evelyne Tschopp. Obviously, both competitors perfectly know each other as Kelmendi was trying to impose her powerful left arm over Tschopp's shoulder, and the Swiss was trying everything to avoid it. But as the Kosovar was not able to pass over the head, she went under the arm... for the same result, a beautiful koshi-waza technique for a beautiful ippon. Kelmendi is back on top of the podium.

In the first bronze medal contest, Betina Temelkova of Israel was opposed to Ana Perez Box of Spain. Last year’s winner Temelkova scored a beautiful first waza-ari with an action-reaction technique that she immediately followed on the floor with an immobilization. The match seemed to be done, but Perez Box managed to escape and turn the situation to her advantage to catch the Israeli with an immobilisation of her own and score ippon.

For the second bronze medal, the 2018 Antalya Grand Prix bronze medallist, Pupp Reka (HUN) faced the 2018 Cancun Grand Prix silver medallist, Agata Perenc (POL). Pupp was penalized with a first shido for passivity after one minute and thirty seconds. Entering the last minute, the Polish scored a beautiful first waza-ari to take the lead and gently control the end of the match to take the bronze medal back home. 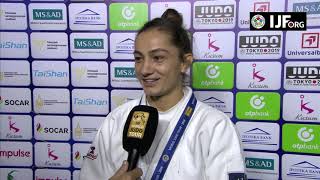