A final U73kg worth watching but in practice there was a lot of tension. The last time they fought it was An who won although it wasn't a very convincing win. An fought superbly against Hashimoto's teammate Ono in the 2018 Asian Games though and An is the one on fire. After two minutes it was AN to spoil the Japanese party by an uchi-mata followed by a massive ko-soto and hugged him to the ground with full control of the hands. An is the world champion and the Korean broke through the Japanese barriers as Wang-Ki Chun was the last non-Japanese to win the world title in 2009.

Hidayat Heydarov once more showed his super talent today at home in Baku. He won the bronze medal in an interesting bronze medal fight against the Mongolian surprise Tsend-Ochir Tsogtbaatar. After two minutes in the match he scored a wazari for sumi gaeshi and took the lead. The home advantage factor gave the push to Heydarov to go over the top but also the Mongolian enjoyed the sphere of such top level. Instinctive judo in this bronze medal bout delivering the first medal for the home nation under the eye of the national President. The 2017 European Champion showed his emotions after he won this terrific medal. Last year Azerbaijan won four medals in total in Budapest, this was the first here in Baku.

In a rather boring bronze medal fight between Mohammad Mohammadi of Iran and Odbayar Ganbaatar both couldn’t come to a score in the first four minutes. Both were exhausted after a long and surprising day and both had two penalties in the golden score. After three minutes nobody had expected an ashi-waza and buried Ganbaatar with a huge score. Another medal for Iran after last year’s success of Saeid Mollaie, the current world number one U81kg. What a motivation for him as Mohammad Mohammadi totally surprised today. Mohammadi came on top against Lasha Shavdatuashvili in the quarter final. Mohammadi defeated Tommy Macias (SWE) in a tough pool and confirmed the strong comeback of Iran in international judo.

The crowd went absolutely nuts in the semi final between Hashimoto and Heydarov. Both entertained the fans to the bone in an exciting match. Azerbaijan’s super talent was witnessed by the president and showed his best against Hashimoto. No score in the first four minutes only a few penalties. After 5.5 minutes Hashimoto created the space by killing the grips of Heydarov and flew under Heydarov with a sode-tsuri-gomi-goshi for the final score. Hashimoto knew he had the chance to become the double World Champion. HGas

In the second semi final An Changrim scored a wazari after two minutes with an otoshi against Mohammad Mohammadi. Twenty second for the end An showed his groundwork skills and went for a successful juji gatame. An is in great form and after two bronze medals in 2014 and 2017. The junior World Champion knows what it is to fight in the world top U73kg for years.

In the first repechage Odbayar Ganbaatar (MGL) defeated Zhansay Smagulov who was a sensation today but also the Mongolian was so strong and surprised Smagulov and prolonged his chance on a medal. Tsend-Ochir Tsogtbaatar had a super day today and the youngster was the right choice for this category although he stepped up weights quickly in his young career. He did an ultimate try to snatch the experienced Lasha Shavdatuashvili and he made a mistake when Tsogtbaatar went underneath and tried to ride the seoi nage but Tsogtbaatar combined his ride with a ko uchi and broke Shavdatuashvili in pieces, for sure mentally, because the Georgian knew what mistake he made. 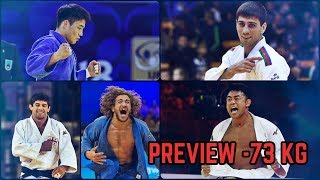 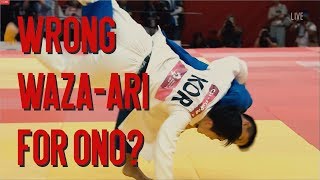 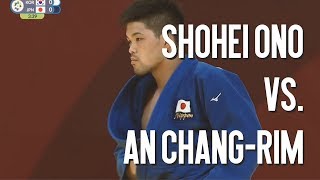