Former world champion Umeki Mami (JPN) walked away from Budapest with gold for the first time in her career having finished second at the Worlds a year ago and fifth at the Grand Prix in 2015. Umeki, who was a surprise winner of the World Championships in 2015, took the final to her compatriot and Ekaterinburg Grand Slam winner Takayama Rika (JPN) with a string of convincing attacks.

Umeki sealed her second Grand Prix title by countering an o-goshi attempt by breaking the balance of Takayama who went over for ippon.

In the first semi-final Umeki threw world number two Natalie Powell (GBR) for ippon to extend her one-sided 100% record against the Welsh judoka to 8-0. In the second semi-final Paris Grand Slam silver medallist Guusje Steenhuis (NED) was thrown by Takayama with an osoto-gari for a waza-ari score in golden score.

The first bronze medal contest was won by Steenhuis who rushed past world bronze medallist Kaliema Antomarchi (CUB) after 22 seconds as the Cuban had to submit to the shime-waza.

The second bronze medal was won by Powell who showed her class to defeat younger teammate and Rome European Open winner Katie-Jemima Yeats-Brown (GBR).  Powell captured her 17th Grand Prix medal by scoring twice against Yeats-Brown who only moved up to U78kg in July. 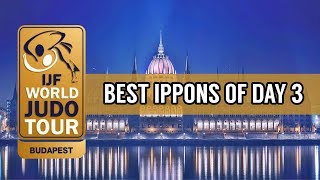