Japanese Nouchi Aimi won her first Grand Prix title as Japan continued to run away with top spot in the medal table. Two-time Grand Slam winner Nouchi took the victory when U23 European Championships bronze medallist Gili Sharir (ISR) was injured Israeli and could not contest the final.

The Japanese has only lost to Olympic champion Tina Trstenjak (SLO) in 2018 - which came in the Tunis Grand Prix final - and will now become a regular sight on the IJF World Judo Tour.

In the first semi-final Sharir prevailed as former Junior Worlds bronze medallist Catherine Beauchemin-Pinard (CAN) was disqualified after being penalised on three occasions for infringing the rules. In the second semi-final Nouchi bested Grand Prix debutant Tang Jing (CHN) by ippon as Japan guaranteed one more medal.

The first bronze medal contest was won by Düsseldorf Grand Slam bronze medallist Bold Gankhaich (MGL) who showed her character to come from behind to defeat Tang. Bold fell behind to a waza-ari score before levelling terms with a beautiful sasae-tsurikomi-ashi. While the crowd was split between supporting the two judoka it was the Mongolian who triumphed with a seoi-nage in golden score which earned a second waza-ari.

The second bronze medal was won by Beauchemin-Pinard who defeated Beijing 2008 Olympic bronze medallist Ketleyn Quadros (BRA) with the only score of the contest. The world number 19 from Brazil lost out to the world number 23 from Canada by a single waza-ari score from an ouchi-gari. 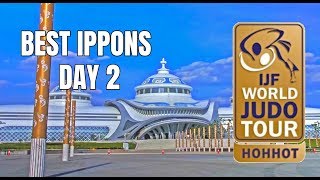 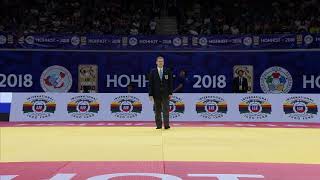 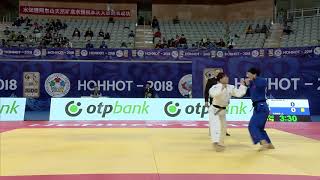