At the Grand Prix of Zagreb European bronze medallist Adlan BISULTANOV (RUS) produced a clinical display to come away with the gold medal for Russia. BISULTANOV guided his country to the top of the medal table in Croatia by coming out on top against former European Team Championships bronze medallist Aleksandre MSKHALADZE (GEO).

The Georgian, who finished seventh at the Paris Grand Slam this year, secured a career-best result despite losing out with only seven seconds left as he tapped out to a powerful yoko-shiho-gatame hold after BISULTANOV, who was leading by waza-ari, had executed a neat turnover.
In the first semi-final BISULTANOV wore down Madrid European Open silver medallist Jevgenijs BORODAVKO (LAT). Both were penalised with a shido before the Latvian received a second for passivity and with 96 seconds left BISULTANOV come straight through the middle to throw with uchi-mata for ippon. In the second semi-final MSKHALADZE saw off African champion Lyes BOUYAKOUB (ALG) in a scoreless contest which would send one of the judoka to their first Grand Prix final. MSKHALADZE advanced to guarantee at least a silver medal as his Algerian adversary recieved a fourth and final shido to receive hansoku-make.
The first bronze medal was won by European u23 champion Jorge FONSECA (POR) who was tactically spot on as he let BOUYAKOUB accumulate four shido penalties. FONSECA trailed to a waza-ari score after 35 seconds but his Algerian foe thought he had already done enough and sat back on his slender advantage which was called up on by referee who gave him a fourth and final shido with eight seconds left for passivity. The second bronze medal was won by Latvia’s BORODAVKO who dispatched Sarajevo European Cup bronze medallist Miklos CIRJENICS (HUN) by ippon after 57 seconds. 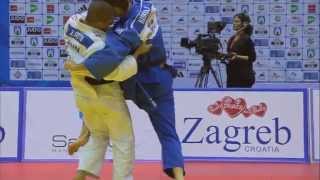