Nouchi Aimi of Japan won Russia’s Grand Slam in Efor the second time as the unseeded Japanese was the fighter of the day at U63kg. Nouchi, 22, who won the Tyumen Grand Slam in 2016 and Tunis Grand Prix silver medallist bested one-time Grand Slam winner Juul Franssen (NED) in the last final of the day.

After a stalemate in regulation time, golden score could not produce a score but did produce a winner when Franssen was penalised for passivity to receive hansoku-make.

In the first bronze medal contest Ozdoba-Blach lost out to Rome European Open bronze medallist Edwige Gwend (ITA). The Italian was back on the Grand Slam podium with a narrow win over her Polish rival by a waza-ari score.

The second bronze medal contest saw Di Cintio defeat European Games winner Martyna Trajdos (GER) by a waza-ari to secure her first Grand Slam medal and one which will pave the way for her to book her ticket to more Grand Slam events in 2018 in one of France’s strongest weight categories. 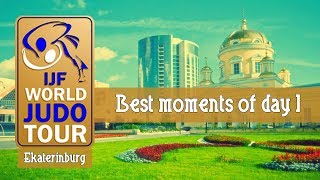