Kalanina was the first in action trying to take advantage of the fact that she is probably one of the tallest athletes on the circuit and that is what she did as she pushed Anamari Velensek to be penalised twice for passivity within the regular time. As the golden score started, everything was stil possible, but you don't change a tactic that works, and Yelyzaveta Kalanina continued to attack before her opponent. Even if the movements where not strong enough to score, they were powerful enough to make the Slovenian penalised a third time for passivity. This is the first gold medal in a Grand Prix for Kalanina.

The first bronze medal contest opposed two young athletes as the local Yousra Aourz (MAR), whose best result so far was a silver medal at the Cadet African Championship 2016, faced Anna Gushchina of Russia, who was silver medallist of the Junior European Championships last year. A little more than 30 seconds were enough for Gushchina to execute a perfect left handed uchi-mata for ippon. The shortest contact of the day so far.

In the second bronze medal contest, Croatia secured a medal as both Ivana Maranic and Ivana Sutalo of Croatia qualified to have a chance to step on the podium. A first shido was awarded to Maranic for passivity, followed by the same penalty to Sutalo and half way to the end, both athletes were already penalised with one shido each. But as the athletes entered the second half of the contest, Sutalo scored a waza-ari which was immediately followed with an immobilisation for ippon to win here third Grand Prix medal. 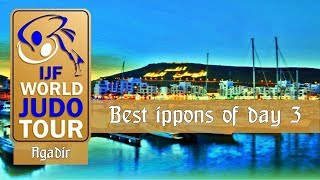 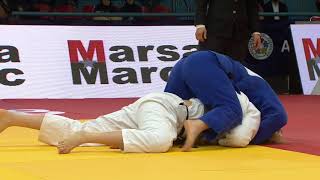 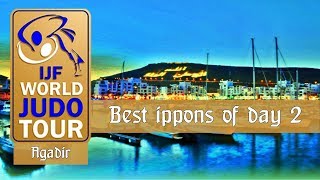