The preliminary matches of the World Open Championships in Marrakech saw some great battles and surprising results. Especially the lighter judokas such as Nikiforov and Granda excelled in this openweight category and qualified for the semi finals. The return of Ilias Iliadis was just great to see when he was opposed to Roy Meyer. The Greek came back for the new generation and the generous smile after his contest was full of warmth for judo.

Everyone was eagerly awaiting the clash between the nine-time world champion and two-time Olympic champion Teddy Riner and his challenger of the semi-final of the last Budapest World Championships, the Georgian Guram Tushishvili, who had made the French giant slightly falter. This time, everything went well for Riner, when the two men met in the second round.

After a harsh first fight against Iurii Krakovetskii (KGZ) in the first round, but convincingly won by Riner, he was again on the scene against Tushishvili who was ready to take revenge and show that despite his smaller size, he was able to win. As in Budapest, the Georgian put his heart and soul into his quest, and as in Budapest, he was defeated by the French, who was actually less in danger, as he was really careful on the hands, and marked two waza-ari including a first from a magnificent harai-goshi which propelled Tushishvili almost to the ceiling of the Palais des Congrès.

Riner then won against Faicel Jaballah (TUN) and Temuulen Battulga (MGL), before facing in the semifinals the Cuban Andy Granda, who had defeated Ojitani Takeshi (JPN).

The least we can say is that the playoff stages of this Open World Judo Championship kept all its promises. The particular format of this competition (no weight category and full draw, without to seeded athletes) ensured beautiful first matches.

But it must be said that each fight had an interest in being followed and the number of positive scores was important for the great pleasure of the spectators and especially the children of the orphanage that the IJF and the champions visited yesterday.

One of the interests of following an open world championship is to see matches that one is not used to seeing, such as the one between Ilias Iliadis (GRE), out of retirement for the occasion, and the Dutch colossus Roy Meyer. Ilias, despite all his efforts and his combativeness, did not succeed in preventing Meyer from going on to the next round. With a smile on his face and satisfied with having given everything, Iliadis left the tatami under the applause.

The eternal return of triple world champion Alexander Mikhaylin (RUS) was also expected here in Marrakech. Winner of the Mongolian Ulziibayar Duurenbayar, in the first round, he won against Nadjib Temmar (ALG) in the second match. But the big test took place in the next round, while the Russian was opposed to the Frenchman Cyrille Maret, to whom the heavy categories are doing quite well, since he remains on a gold medal obtained at +100kg in Abu Dhabi a few weeks ago. Maret had also a significant victory in the previous round against Olympic bronze medalist Or Sasson (ISR).

In a rather balanced fight, Maret made the mistake of launching an unconvincing attack and was countered by Mikhaylin who won the match. In the quarter-finals, Mikhaylin was opposed to Toma Nikiforov (BEL) who gave him no chance and won his ticket to the semifinal with great skill.

Cuban Andy Granda (CUB) qualified for the semifinal against Riner, having eliminated Anton Krivobokov (RUS), Oleksandr Gordiienko (UKR) and Ojitani Takeshi (JPN), while the last qualifier for the final four was discreet Kageura Kokoro (JPN), who showed a pure and efficient judo throughout the morning. 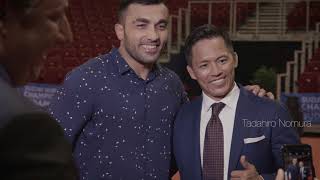 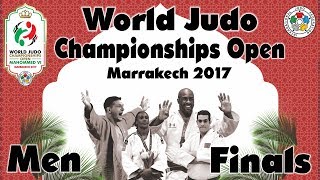 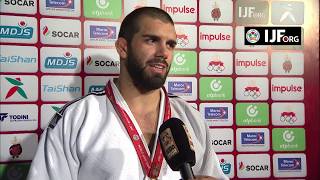