Defending Junior world champion Funakubo Haruka successfully retained her Junior World title in Zagreb with a virtuoso display as she won all five of her contests by ippon. The 19-year-old is undefeated in international competition and looks poised for inclusion in this year’s Tokyo Grand Slam at the beginning of December.

Funakubo defeated 18-year-old former Ulaanbaatar Grand Prix winner Lkhagvatogoo Enkhriilen (MGL) in the final with a hold down to seal U57kg gold and ensure that Japan won both women’s titles on day two.

In the first semi-final contest Lkhagvatogoo defeated former Cadet World Championship silver medallist Tihea Topolovec (CRO) after four and a half minutes of golden score. A shido against the Croatian for being passive settled the contest after the Mongolian had been the aggressor in regulation time and in overtime. In the second semi-final Funakubo rushed past 16-year-old Junior Asian Championships winner Kim Jisu (KOR) who received three shidos and was disqualified inside two minutes.

The first bronze medal was claimed by Kim who beat 19-year-old Kim Ji Hye (PRK) by a waza-ari score.

The second bronze medal contest was won by Junior European Cup winner Mina Libeer (BEL) as home judoka Topolovec had an agonising fifth-place finish. The Croatian received a shido after four minutes and 10 seconds of golden score to send her opponent onto the final place on the U57kg podium.

Read all other stories from Zagreb 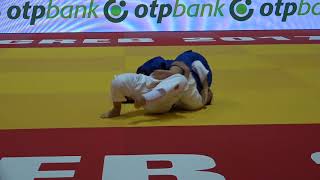 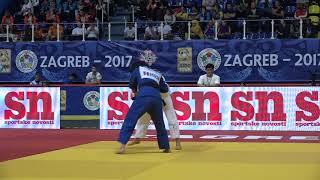 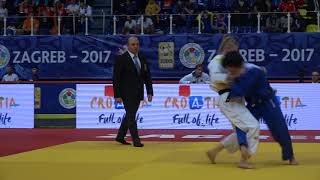