IJF World Judo Tour rookie and Grand Prix debutant Betina Temelkova of Israel starred in the U52kg category with a eyecatching gold medal at the Grand Prix in Tashkent. Temelkova, 20, defeated three-time Grand Prix bronze medallist Agata Perenc (POL) to complete an incredible debut at the highest level with a masterful ko-soto, that had a hint of a modified kata-guruma about it, to earn ippon and Grand Prix gold at the first time of asking.

Last month Temelkova won the silver at the Junior European Championships in Maribor. Since this year Temelkova decided to fight for Israel. The former Bulgarian won silver medals at European Cadet Championships, European Junior Championships and Youth Olympic Games. Finally the gold was reserved for the talented 20-year old.

The winner said: “I’m so happy that I competed at the Grand Prix Tashkent and won my first and gold medal for seniors under the Israelian flag. This is one more important step this year, for me this is the beginning and I wish to continue the same way.  Big thank to my coach Shany Hershko that led me through the competition day as well the whole team of staff and coaches.“

The first bronze medal was clinched by London 2012 Olympic bronze medallist Charline Van Snick (BEL) who had too much quality for Bezalel. The Belgian, who was being coached by former French international and 2009 Paris Grand Slam winner Dimitri Dragin, scored a waza-ari from a sode-tsurikomi-goshi and held down her opponent with a sankaku-gatame for 20 seconds and ippon.

The second bronze medal was won by 35-year-old Petra Nareks (SLO) who was all business against 24-year-old Pienkowska. Slovenia’s Nareks scored a waza-ari from a ouchi-gari and held off a plucky challenger from Poland who made sure that the former had to work hard to capture a place on the medal podium in Central Asia.

Read the story about the women U48kg. 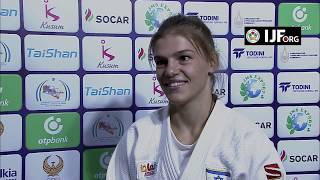 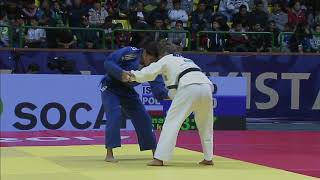 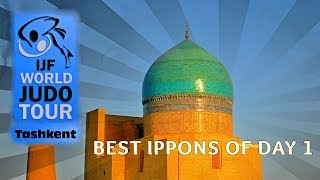