The U78kg world title returned to Brazil as Mayra Aguiar topped the World Championships medal podium for the second time. Aguiar, who won the Worlds in 2014 in Chelyabinsk, had power, precision and poise and should not control the category on the road to the Tokyo 2020 Olympics which would be her third Games.

The 26-year-old double Olympic bronze medallist prised the red backpatch from the defending world champion Umeki Mami of Japan by a waza-ari score in golden score and the Judo Sogipa star erupted with emption as the 18-strong Brazilian team created a carnival atmosphere in the stands.

Aguiar: I simply can't believe that I could win the world title second time, I have been inspired by João Derly, the only two times world champion judoka of Brazil. From today I know how it feels to win second gold medal after my first place in 2014. It is wonderful and I am extremely happy.

Mami Umeki said “Of course I'm disappointed to lost in the final and get the silver medal, that wasn’t my goal before this competition. I was looking for the gold , but I tried my best, it wasn't enough. I’m going to do a better performance in the next world champs and of course I will go for the gold medal in the 2020 Olympics.”

In the first semi-final the Netherlands’ last world champion, Marhinde Verkerk (NED), lost to Umeki by a waza-ari score as the Japanese judoka kept on track in her bid to retain her title.

In the second semi-final Aguiar defeated three-time Grand Slam winner Sato Ruika (JPN) by a waza-ari from a drop seoi-nage.

In the first bronze medal contest Cancun Grand Prix bronze medallist Kaliema Antomarchi (CUB) defeated Sato by a waza-ari score as Cuba were represented on the medal podium for the first time in Budapest. Antomarchi delighted her teammates in the crowd who she pointed to after being awarded the contest after a fine showing in Hungary. “It's amazing that I managed to win the first medal in the history of the World Championships for my country and of course for myself. I'm really proud now and I can’t tell you how happy I am right now. My family is here and they saw how I won this bronze medal.”

In the second bronze medal contest double European bronze medallist and Rio 2016 Olympian Natalie Powell (GBR) emphatically defeated Verkerk to win a second medal for Britain this week. The 15-time Grand Prix medallist, who won Commonwealth Games gold for Wales in 2014, threw her Dutch opponent for ippon with an o-uchi-gari on the edge of the contest area to double Great Britain’s medal tally going into the final day of the individual competition on Saturday. It was back in 2001 that Great Britain delivered two female World medallist in Kate Howey and Karina Bryant.

Powell: “I am really happy that after the bronze medal in the European Championships in April I could win another one here in Budapest. I have three really tough months behind me, that I devoted to the preparation for this event. It is a great feeling that hard work payed off. My last meet was the most difficult one, my Dutch counterpart seemed to be a little stronger than I, but finally I could throw her. This is what judo is like: things can change in a fraction of time.” 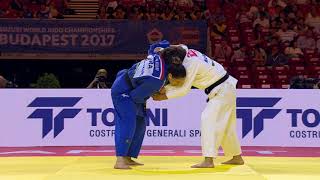 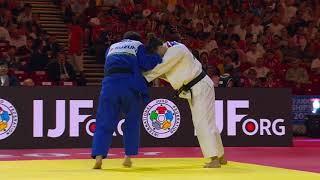 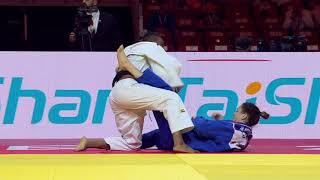