“High level sport is different than other activities because there is only two ways: you are either on top, or you are nobody.” Despite the unevitable ego wars of any such human journey, Pawel Nastula was helped in the beginning by Japanese Hiromi Tomita, Waldemar Sikorski is headcoach from 1968 to 1980, when pioneers like Antoni Zajkowski and Marian Talaj both become bronze medallists in Munich ’72 then Montreal ’76. Ryszard Zieniawa is then in charge until 1991 and leads Poland to the second place behind Japan at the 1986’ Kano’s Cup. The golden generation of Waldemar Legien and Janusz Pawlowski -the second one was bronze medallist in Moscow ’80 then in Seoul ’88, meanwhile the first one was Olympic champion of the U78kg category in 1988 then Olympic champion of the U86kg category in 1992- slowly leaves the place to let enter Rafal Kubacki, Beata Maksimow and Aneta Szczepanska, who happened to become the only Polish female Olympic medallist back to 1996 in Atlanta.

The way he destroyed –in one single spread. the reigning Olympic champion in this highly awaited first round of the ’96 Olympics remains unforgettable. Collar-pelvis clamping, osae-komi attempts and academic juji-gatame’s ending… However, this ne-waza demonstration was just a kind of haïku compare to what he already showed during 2 minutes and 53 seconds against Sergueev from Russia in the ’95 Birmingham European Championships final. “I’ve lost some fights on ne waza at the beginning of my career. I remember the ones at a Juniors European Championships and in final of the ‘91 Seniors World Championships. So I’ve decided to work on this and it paid. Little by little, the ground sessions became a matter of sensation and rhythm. I’ve realised that by working like this I was less tired… but I exhausted my opponents. I saw in their eyes that they became afraid to go to the ground with me. It made their fighting scheme fragile, even on tachi waza…”

Guest of some seminars in Poland and overseas, Pawel Nastula owns two big places in Warsaw where 2,000 members come daily for judo, fitness, crossfit or MMA. 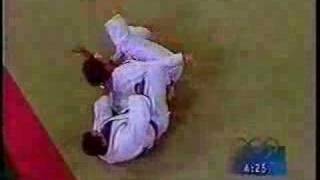 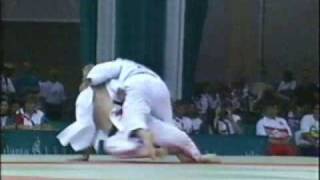