Two-time world champion Cho Min-Sun of Korea is one of her country’s most decorated judoka. Cho, 45, a long-time teammate of IJF Hall of Famer Jeon Ki-Young, is now an IJF A referee who was officiating in Hohhot.

Before embarking on a second career in the middle of the tatami, Cho was the one creating ippons instead of awarding them. “I started judo when I was 13 because it looked like a fun activity,” said Cho who started refereeing on the IJF World Judo Tour in 2014.”

“I was the first person in my family to do judo and immediately I took to it. I won the national championships at 16 years old in the U48kg category and then I had the belief that one day I would be world champion.”

The South Korean legend recalled watching the 1985 World Championships in Seoul, on her own, and was inspired to take her judo career to this stage.

“I wanted to show my best to the world, to accomplish everything I could and to make my team and family proud. The Olympics was also my aim and I did not go in 1992 but I did go in 1996 to the Atlanta Olympics and I won. These results gave me amazing feelings and memories I will always treasure. “The World Championships are a special event and are a fantastic presentation of our sport. I am sure that the world will enjoy what is in store in Budapest next month.”

Who were the opponents of Cho Min-Sun in the past? 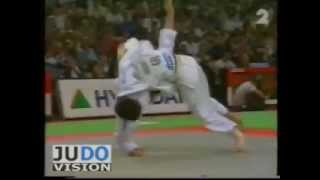