American Marti Malloy won the Grand Prix in Cancun in her category U57kg. Ekaterinburg Grand Slam winner Miryam Roper of Panama made history last time out when she won Panama’s first ever IJF World Judo Tour medal but had to settle for silver in Cancun after she could not contest the final against long-time rival Marti Malloy due to a knee injury sustained during her warm-up.

Roper, 34, lost to Malloy for bronze at the Pan American Championships this year on her Panama debut and London 2012 Olympic bronze medallist and former world silver medallist Malloy also ended up with the win this time around in Pan America. A third Grand Prix gold for Malloy puts her on the brink of a title tilt at the World Championships while Roper is equipped to mount the same challenge in Budapest.

In the first semi-final Roper gave Bucharest European Open bronze medallist Jaione Equisoain (ESP) all sorts of problems with her probing ashi-waza and opened the scoring with a waza-ari from a ko-soto-gake. Roper then showed off her ne-waza as she pounced on her opponent to tap out the Spaniard on the ground and move into the final. In the second semi-final evergreen veteran Sabrina Filzmoser (AUT) went the distance with Malloy as they could not be separated after a tenacious four minute battle. Only 12 seconds of golden score was required as Malloy scored a waza-ari with a ko-uchi-gari as her Austrian foe almost countered with a ura-nage but the back of Filzmoser touched the mat first and the American moved forward into the final.

The first bronze medal was won by Filzmoser who held down five-time Grand Prix medallist Viola Waechter (GER) for 20 seconds with a ushiro-kesa-gatame for ippon. The wily Austrian, 37, subdued her 30-year-old German opponent on the ground in trademark fashion and now looks set for one more appearance at the World Championships.

The second bronze medal was won by former Pan American Championships bronze medallist Anailys Dorvigny (CUB) after four minutes of golden score against former Almaty Grand Prix silver medallist Equisoain. The Spanish judoka led with a waza-ari from a ushiro-kesa-gatame hold but Dorvigny fought back in the closing seconds to force golden score. Equisoain was penalised for a false attack in the fifth minute of added time to hand the bronze medal to the Cuban judoka. 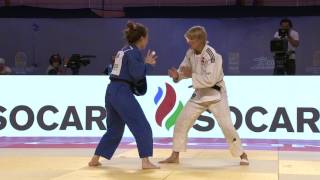 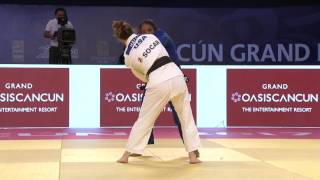 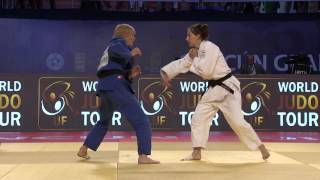