World champion Umeki Mami of Japan won her first Grand Slam title and in process recorded back-to-back wins on the IJF World Judo Tour. Umeki, 22, who was worn her red backpatch since 2015 – as there are no World Championships in an Olympic year – won the Dusseldorf Grand Prix last time out.

In Sunday she won all four of her contests in Ekaterinburg by ippon including the final against double European bronze medallist Natalie Powell (GBR). World number five, Powell, fighting in her first Grand Slam final, matched her Japanese opponent for much of the contest but when the action moved to the ground it was Umeki who was sharper and applied a ude-garami and the Welsh judoka was forced to submit.

In the first semi-final European Championships bronze medallist Joo Abigel (HUN) lost out to Umeki who forced the Hungarian to submit while also holding her down.

In the second semi-final Powell left her leg in just long enough to turn Abu Dhabi Grand Slam silver medallist Anna Maria Wagner (GER) on the edge of the mat and drive over the youngster for ippon. 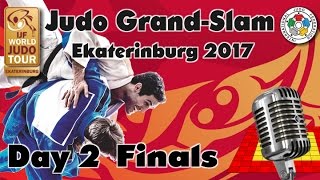